END_OF_DOCUMENT_TOKEN_TO_BE_REPLACED

Another eight days in Tokyo, for work plus sightseeing, also serving as a tour guide for Roy.
I’ve been in Tokyo for over a week every year since 2007, so I know the city sights well.  This 2010 trip saw me serving as a tour guide for Roy (who came on the same plane as me from Toronto), as well the many of the other visiting researchers.  On the first night, Sunday, the group convened at the usual hotel near Tamachi station.  We randomly chose a pub, where we puzzled through a Japanese menu and ended up ordering a hotpot from a waiter who spoke no English. Early Monday morning, we took the train over to the Tsukiji market.  Coming by a different route than before, we encountered a temple where businessmen were making offerings. In mid-morning, some of the tuna were still in recognizable forms, with fishmongers rapidly creating portions with saws and knives. On this visit, I discovered the reason that some tuna are called yellowfin.  These had a yellow fin smaller than a thumbnail. From Tsukiji, we walked through the Ginza, and up towards Yurakucho.  We stopped by a pachinko parlour where the machines were as loud in the morning as they are in the evening. END_OF_DOCUMENT_TOKEN_TO_BE_REPLACED

We were lucky to see the Meiji Jingu (Shinto Shrine) by Harajuku station, with the coincidence of seeing a wedding procession in progress.
I’ve been to the Harajuku district on every trip to Tokyo, and somehow managed to arrive at the Meiji Jingu at times when the gates are closed.  This time, Marianne and I found the gates to the garden open. I guess that Saturday afternoon is a good bet for families to visit the gardens. As we entered the gardens walking north, I enjoyed the view of the brook to the side. The park honours the Emperor Meji who passed away in 1912, and is interred in Kyoto.  The view of the long, tree-covered walk is impressive. Sake barrels are displayed as decorations, emptied from prior festivals after having been donated by local brewers. The Meiji period was seen as enlightened one, when the emperor enjoyed western food and took wine with it.  Wineries in Bourgogne, France, consecrated these barrels in the emperor’s honour. END_OF_DOCUMENT_TOKEN_TO_BE_REPLACED

We went to the observation deck of the Tokyo Metropolitan Government building, and then walked through Shinjuku.
The view from observatories at the top of the Tokyo Metropolitan Government building is recommended around sunset … and it’s free. This building is towards the west side of Tokyo, so looking out that window shows a few skyscrapers in the foreground, with shorter buildings fading into the horizon. 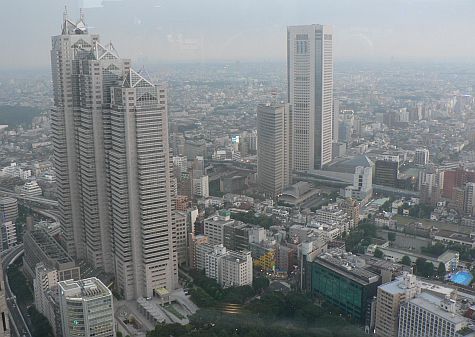 Looking north and east at dusk, the distance from the Shinjuku district to the harbour was too great to see any water. 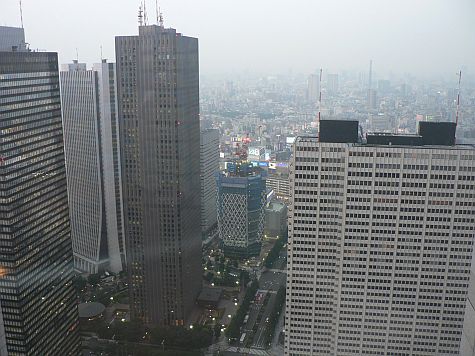 END_OF_DOCUMENT_TOKEN_TO_BE_REPLACED

The NTT InterCommunication Center and Art Gallery at the Tokyo Opera City complex are fun for kids of all ages.
After the art gallery focused on the last century, we took the subway over to Opera City. After riding a series of escalators up, we found the NTT InterCommunication Center. Beyond the usual WIMP — Windows, Icons, Mouse, Pointer — interface, there were much larger scale devices to interact with computers. Some displays were by computer science students, and there were even some from the HCI scientists at IBM Research. The guides didn’t permit photographs in the main galleries, but encouraged us to take pictures in the kids’ area. Diana and I took turns crossing the bridge, causing ripples in the projected “water” underneath. 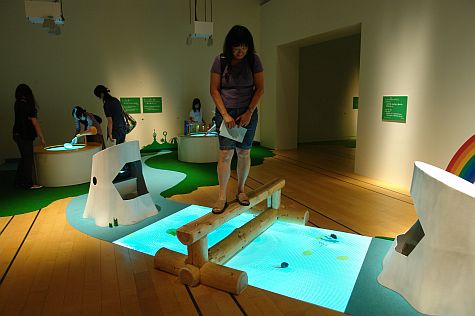 On one of the large screen interactions had us bouncing bubbles up, before they hit the ground. 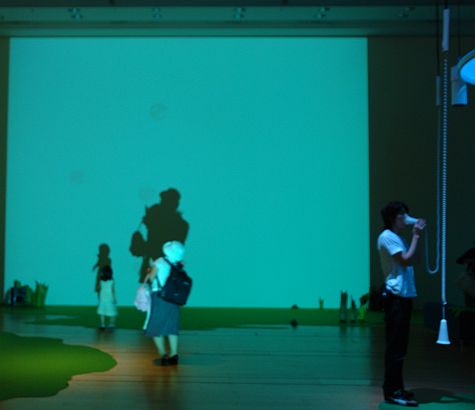