When I’m in Finland, the places are now familiar, and I get to meet people face-to-face.
Routing a flight through the UK is generally fortuitous, because it’s on the way to Finland. Since I’ve been coming to the Helsinki area relatively steadily during since 2003, I’ve developed a routine of doing similar things when I’m in town. On this trip, Minna and I co-taught a class at Stadia. One difference on this occasion was the grand meeting room, which is an improvement over the basement lecture hall. 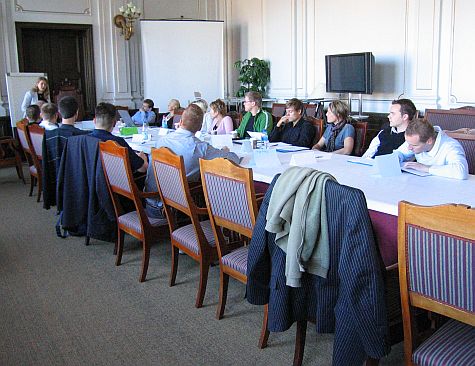 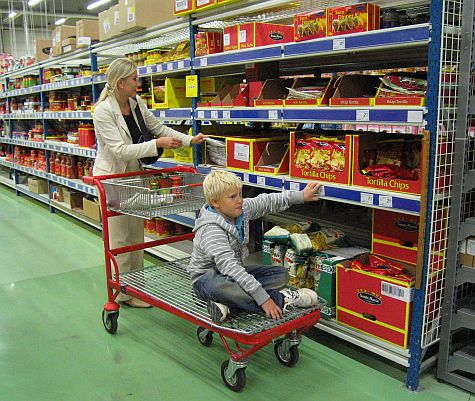 On weekends, there’s an opportunity to prepare a leisurely dinner. This time, at Taina’s house in Soukka, we decided to cook Chinese food — an improvement over the choices available in local restaurants. END_OF_DOCUMENT_TOKEN_TO_BE_REPLACED

We met Gary and Teri at a dinner with Karlos at Eatz, and walked the next morning to Stadia, where we planned for the next day’s workshop.
For the Helsinki portion of the Rendez workshop, we were joined by Gary and Teri, who had just flown in. With DLH in town for such a short trip, Karlos joined us for dinner at Eatz. 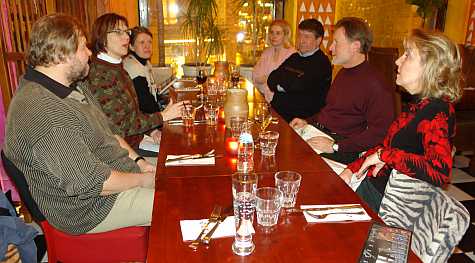 Although I prefer the apartments at the Accome Parliament, the rest of the group stayed at the SAS Radisson Plaza just east of the Central Railway Station. The 20-minute walk to Stadia started by a new Ice Park directly on Railway Square. 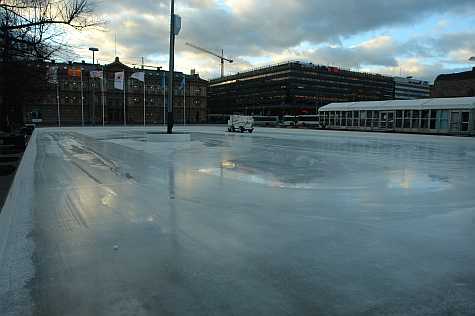 END_OF_DOCUMENT_TOKEN_TO_BE_REPLACED

Lecturing on social software at the Helsinki Polytechnic Stadia, in the trail of Jim Spohrer speaking in Finland about services science, management and engineering.
Instead of the usual “English class” lecture, David speaks on “social software”.

(by David): Minna had asked if I could talk with her friend, Taina, who had opted out of Nokia in favour of teaching at Stadia, which is the Helsinki Polytechnic. Taina finished her Ph.D. at HUT, probably a year or two ago. Minna told me that the Stadia building was actually the original home of HUT. It’s on the Bulevardi, beside the shipyards and waterfront in central Helsinki. The institution started as a Polytechnic, became a Technical University, and then grew out of those buildings for new labs to be built in Otaniemi, which must have been a forest west of the city back then. (They must have put those bridges in, because there are two choices to cross that expanse of water).

As it happens, one of the few times that our schedules lined up was during a class, so Minna and I went over to speak to the class. When I walked in the classroom, this seemed like an IBM meeting â€” every student had a laptop, and their screens were up. (There was a uniformity to the HP machines which makes me think there’s sponsorship going on). Taina introduced us, Minna talked about knowledge management, and I talked about my experiences with Instant Messaging, wikis and blogs.

When Minna introduced herself, she said that she was a mechanical engineer, but she actually gave quite a managerial talk. I remarked that my degrees are in business, but I was going to be giving the technical talk!

The director of IBM Almaden Services Research, Jim Spohrer, was here about 3 weeks ago, giving talks on how IBM thinks that universities should be reoriented to teach classes in “Services Science, Management and Engineering“. Minna actually was leading a research project at HUT before she went to the New Jersey, and had thought that her research was 20 years behind. In fact, it’s proven to be six years ahead, as her content is much the same as the IBM message now.

The Finns have a knack for industry and universities to be working together in a way that we find foreign in North America. Minna and Taina are cooking up plans to have a services course in early short order â€” by the spring â€” and are working a plot that I might get involved. There’s a possibility that we might get the Finnish managers to request that I be involved somehow related to my day job, rather than the vacation time I’m currently on. This would be welcomed….