Last year when I visited the University of Hull Business School, I did a 2-hour lecture for Alan Benson‘s MBA class. Since the students didn’t throw me out of the class then, I was invited back for this year, for a 6-hour session.

As a change, I decided that I would do more traditional innovation content, and thus spent a long time working through definitions from Schumpeter 1934 (The Theory of Economic Development) and Schumpeter 1943 (Capitalism, Socialism and Democracy). Given that those works were published pre-WWII, I asked the students to challenge the assumption that Schumpeter is still valid in a Thomas Friedman “world is flat” context. In groups of two or three, they discussed how a business they knew might work differently when “the world is flat”. 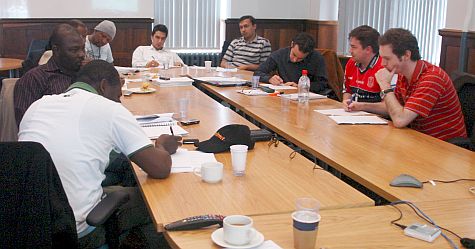 END_OF_DOCUMENT_TOKEN_TO_BE_REPLACED

Lecturing on social software at the Helsinki Polytechnic Stadia, in the trail of Jim Spohrer speaking in Finland about services science, management and engineering.
Instead of the usual “English class” lecture, David speaks on “social software”.

(by David): Minna had asked if I could talk with her friend, Taina, who had opted out of Nokia in favour of teaching at Stadia, which is the Helsinki Polytechnic. Taina finished her Ph.D. at HUT, probably a year or two ago. Minna told me that the Stadia building was actually the original home of HUT. It’s on the Bulevardi, beside the shipyards and waterfront in central Helsinki. The institution started as a Polytechnic, became a Technical University, and then grew out of those buildings for new labs to be built in Otaniemi, which must have been a forest west of the city back then. (They must have put those bridges in, because there are two choices to cross that expanse of water).

As it happens, one of the few times that our schedules lined up was during a class, so Minna and I went over to speak to the class. When I walked in the classroom, this seemed like an IBM meeting â€” every student had a laptop, and their screens were up. (There was a uniformity to the HP machines which makes me think there’s sponsorship going on). Taina introduced us, Minna talked about knowledge management, and I talked about my experiences with Instant Messaging, wikis and blogs.

When Minna introduced herself, she said that she was a mechanical engineer, but she actually gave quite a managerial talk. I remarked that my degrees are in business, but I was going to be giving the technical talk!

The director of IBM Almaden Services Research, Jim Spohrer, was here about 3 weeks ago, giving talks on how IBM thinks that universities should be reoriented to teach classes in “Services Science, Management and Engineering“. Minna actually was leading a research project at HUT before she went to the New Jersey, and had thought that her research was 20 years behind. In fact, it’s proven to be six years ahead, as her content is much the same as the IBM message now.

The Finns have a knack for industry and universities to be working together in a way that we find foreign in North America. Minna and Taina are cooking up plans to have a services course in early short order â€” by the spring â€” and are working a plot that I might get involved. There’s a possibility that we might get the Finnish managers to request that I be involved somehow related to my day job, rather than the vacation time I’m currently on. This would be welcomed….

Lecturing at the Helsinki University of Technology, and cooking Chinese food in Finland.
David does the teaching thing, and cooks at Minna’s house

(by David): For some reason, I’ve been sleeping irregularly on this trip. I seem to wake up around 4:30 in the morning. This morning at 7 a.m., I had a Skype call with Simon, who is in L.A. It’s bad enough to have a 7 hour difference to Toronto, but with a 10-hour difference, one window of opportunity was the 7 a.m. call here on Thursday morning in Espoo, while it was moderately late on Wednesday night (9 p.m.) in L.A.

I had done slightly more prep for the “Innovation and Services” lecture of the Strategic Management of Technology and Innovation class than usual â€” I had a long list of articles for students to pre-read, and this material is a new direction for me. I had to prepare more Powerpoint slides than normal.

Even with slides, though, I really don’t work from a script. This lecture included stories about the car sharing co-ops in Toronto, the skills of taxi drivers in Beijing (for which Adam had to learn to say “Renmin Daxue”), and our plumber Alex as a knowledge worker (since I rely on him for his experience, and was chauffeuring him around while paying him that day, shopping for a toilet). I cringe at the thought of ever being quoted on these lectures, but I still record them to minidisc for transfer to MP3 files anyway, because the stories seem to get the academic ideas across. I’m usually cautioned that Finnish students are the strong, silent types, but they almost always speak up for me in class. (I always get remarks from other instructors, because the students almost always give me applause at the end of the lecture). This class also seemed to have quite a few Chinese students. Annaleena says that they have to fulfill a number of credits, and she teaches classes in English, so this subject is a likely target for foreign students. (English outweighs Finnish as a probable language for foreign students, even on campus)

Minna took me over to her house for the evening. We went grocery shopping â€” definitely not an abnormal event for me, and an opportunity to get a few unique Finnish products for people back home. Minna still has black beans from my last trip â€” I bought quite a few packages last time, they’re so cheap in Toronto â€” as well as soy sauce and oyster sauce, so the meal was ma po tofu, and beef and broccoli with eggplant. At the Big Apple mall in Espoo, there’s two major hypermarkets. I’d forgotten why I shop at one more frequently than the other, but this time bought the super-dense tofu that vegetarians likely use for steak. (The other store sells a brand with Chinese writing on it).

Fatigue is catching up with me. I asked Minna to take me back to the hotel after dinner, and falling asleep on the short 10 minute ride over.

On the two week trip to Finland, there’s some opportunities to get away from the computer!
There are a few things that David can’t do over the Internet.

(by David): Although I really would prefer to be an introvert, it’s important for me to come to Finland to keep the ties strong. When I’m on the Internet, though, I begin to wonder if it really makes a difference.

I’ve spent most of the day searching out software packages for journals and memberships for the ISSS site. I think that I’ve found two candidates that will work out, and have requested they be installed to try out.

The faculty sometimes ask me to meet with a few students who are close to my profile, i.e. business people back doing their Ph.D.s. I’ve been a researcher for a while, and have published a few articles, so I know which way is up. This candidate came over to the hotel for morning’s conversation over a coffee, which extended into a 3.5 hour advising session. The Finns are getting their return on social capital invested, this trip.

Since I didn’t leave the hotel for all of the daylight hours, Annaleena and I went out to Namaskar, which is reputed as the best Indian restaurant in town. I would agree with that assessment. We ordered a meat thali and a vegetable thali, each with three little stews and side dishes, so we got a good sample of tastes.

Annaleena picked me up at the hotel with her car, and we parked near her apartment. We took the tram into the centre of town, because it’s hard to find parking there. I did the Finnish thing, and paid for the tram fare using my mobile phone. Create an SMS message, and send it to a phone number, and the return message gives an electronic ticket with an expiry time. Neat feature.