Paul treated Diana for a birthday lunch at Kalyvia, a Greek restaurant on the Danforth. 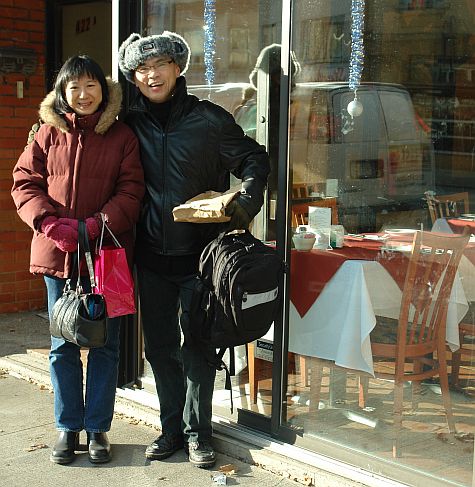 The conversation over lunch seemed to deal a lot with getting older, and planning to do more strenuous thing sooner than later.

Side note: Although I reported getting a Fuji E900 camera just a few weeks ago, I’ve been somewhat frustrated by it. The low-light shooting is better than the Canon S60 that Eric has taken over, but it’s not a fun camera to use. It’s partially the necessary tradeoffs to get manual features into a compact body, and partially that I can’t see the controls without putting on reading glasses!

I’ve thus stepped up to the next level for a “serious” digital camera, a Sony R1. This feels like a tool that was designed by someone who was unconstrained by traditional SLR thinking, and instead blended new electronic technologies with the usability of traditional controls. It’s essentially a sharp Carl Zeiss zoom lens with a fast super-wide angle (24mm f/2.8) lens, and a large Sony CMOS sensor (supposedly the same one used in a Nikon D2X).

I’ve been looking at Pentax DSLRs for some time, which would seem to have been the logical choice with the Pentax-mount lenses that I already own. A new fast wide angle lens would be really expensive, though, so the Zeiss lens on the R1 is worth the price by itself. The final impetus to get the R1 was the rumour that it’s gone out of production. I bought the last one in the store in Toronto, and over the past few weeks, the forums have reported supply totally drying up â€” unless you’re looking in stores in China!

The R1 doesn’t have interchangeable lenses, but I’ll carry either the Fuji E900 (when I expect a waiter to take a snapshot for me!) and/or the Panasonic FZ5 (when I need a super-long telephoto lens with image stabilization).

I believe that the Sony R1 is going to be classic camera, and the market is too small to make a similar follow-on model. It’s made photography fun again â€” so much that I don’t begrudge carrying around the weight of two-plus pounds! At the same time, I’ve decided that I really like photoblogging … and I guess it’s good to have a hobby.