Working for one of the world’s largest corporations means that, in major cities, I can almost always count on a local office with full facilities. On this trip, the location of choice was in Glendale, California. 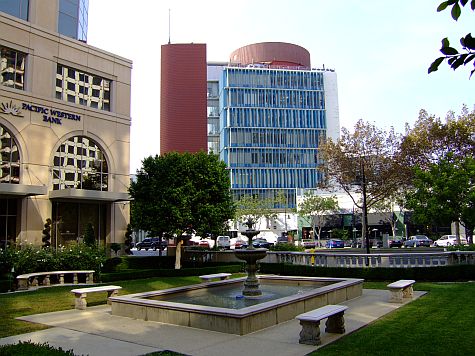 Although I’ve been to the L.A. area a lot over the years â€” and Santa Monica was actually my primary residence for a short period in 1984! â€” I’ve never been to Glendale. It’s seems like a town that had a main street that got absorbed by urban sprawl. Still, it has the feeling of a real town centre, which is something missing in many California places. Through the office window, the mountains are nice, and you can see all of the obvious urban development. 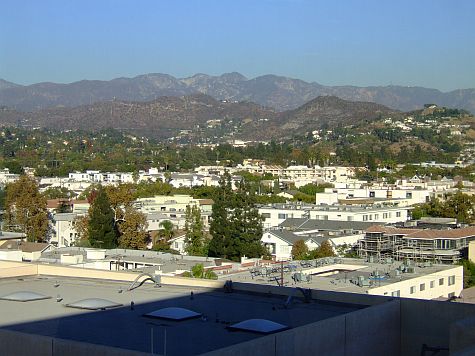 When I went to pick up my printouts in the mailroom, the job right after mine was for “djingram”. I’m a Kellogg School alumnus, and the number of people from my year who work for the same company can be counted on the fingers of one hand. When I got back to my desk, I looked up the name online on Bluepages, and then sent an instant message asking “are you ….”?

After lunch, I returned, and sure enough, Diana had responded to my message, and was sitting in a cubicle within a 20 second walk of mine. I had thought that she had left the company … but she’s back! Our jobs really don’t intersect, so we never would really meet each other. The coincidence of being in the same office at the same time … when my home is in Toronto … is just one of life’s interesting twists.

I asked Diana if she’s planning on coming to the Kellogg 25th reunion for the class of 1982 â€” next May â€” and she’s on the fence. I’ve got some more intelligence for the event organizers, if they’re interested in what alumni really want!

Side note: This marks the beginning of my photoblogging with a Fuji E900 camera. Although I reported getting a new Panasonic FX01, I’ve given that camera to my wife Diana. The FX01 is a great “mom’s camera” that gives sharp pictures, but (a) it doesn’t do very well inside without turning on the flash â€” and I’m an available light bigot; (b) it doesn’t allow me to set aperture and shutter speed manually; and (c) it only has a big LCD panel on the back, without either an electronic viewfinder or optical viewfinder â€” and I now have really poor close vision without reading glasses! Fuji cameras have a strong reputation for available light shooting, but the E900 is turning out to be a camera that doesn’t work well on “auto”. Tuning the camera for each shot takes me back to the old days of manual SLRs!