I’ve been really happy with my Panasonic Lumix FZ5 camera for telephoto shots in daylight, but Eric has been taking over the Canon S60 that I was using for indoor photos. The S60 has a wide-angle (28 mm) lens, and Canons are better than Panasonics in low light.

By specs, I really wanted to buy the Panasonic LX2 â€” it has a nice Leica 28 mm lens â€” but the reviews on its low light performance have been disappointing. Since the price on Panasonic FX01 cameras have fallen, I decided it was cheap enough to buy as an experiment. After buying the camera on Yonge Street, I went over to the computer stores on College Street for an SD memory card. 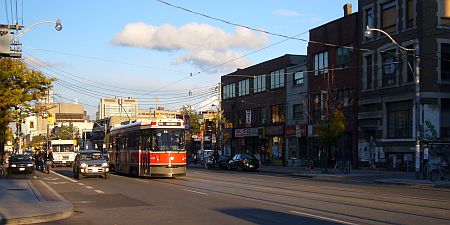 I tried some SD cards in the first store, and the Kingmax that works in my Palm Treo doesn’t work in an FX01. I bought a Sandisk SD card, but then discovered on the Internet that it’s really slow, so the store let me return it. At another store, they let me try an OCZ card that worked.

In bright daylight, the FX-01 takes nice pictures. It doesn’t have an optical viewfinder, just the big LCD, which doesn’t work that well for me because I need reading glasses! (The FZ-5 has a diopter adjustment). I really need a camera for indoor snapshots, though.