The Johnnie Hillwalker tour is highly regarded by guidebooks. It’s a 5-hour walk, starting from Kyoto Station, and meandering northeasternly through the back streets of Kyoto. 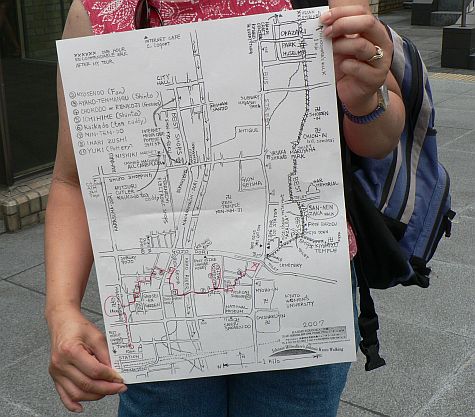 Johnnie does these tours three days per week. It’s supposed to be a relatively easy walk with gradual hills, but with a summer temperature over 35 degrees Celsius with humidity, Johnnie was in better condition than any of the tourists. He warned that we wouldn’t stop for lunch, and would get only one piece of sushi (inari) and one piece of pastry with tea at short breaks. 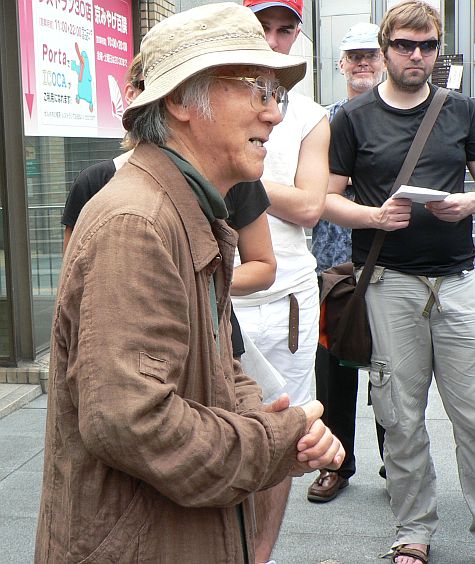 Starting from Kyoto Station, we went into the underground mall, and walked north underground. The first stop was at the Higashi Hongan-ji, another sect of the Buddhist temple we had seen earlier. Much of the building is under construction, and then not available for touring. 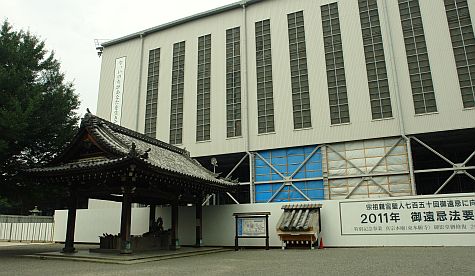 Buddhism and Shinto are complementary religions in Japan. Johnnie said that Buddhism only cares about the dead (the afterlife), and Shinto only cares about the living. The water basin is associated with Shinto. Visitors are encouraged to use the ladle to cleanse their hands and internals (i.e. by drinking). Water can be spilled over the hands outside the basin, not back into the basin. 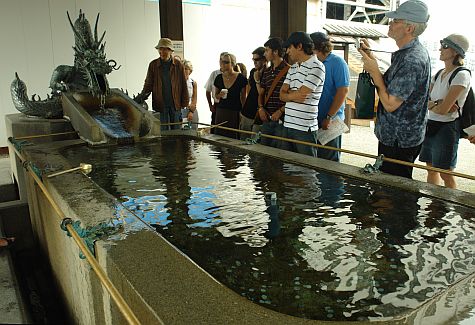 The Amida hall was open for viewing. We sat inside on the tatami mat, and Johnnie said that ceremonies are held at 7 a.m. every morning. However, few except for the Buddhist priests come to the ceremonies, even on holidays. The priests visit home, on thes day of the month when the last person died (e.g. the mother, the father), and pray. In modern Japan, many people send their ashes of their relatives to the temple with a contribution, and the priests pray for them there. 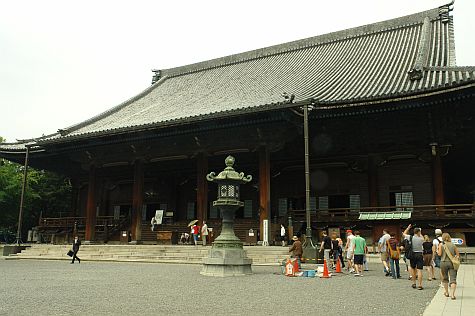 The halls are interconnected by open walkways, with some historical displays about the building. 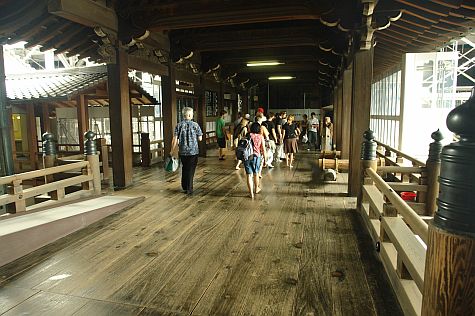 The writings for the day are listed on a rack on the wall. Buddhism came from China, and the Japanese never translated the texts. Thus, the priests read and chant Ancient Chinese — with a joke that they even they don’t understand what it means. 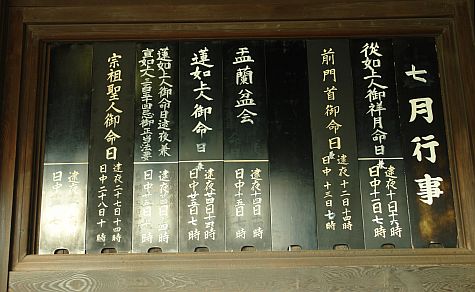 Most recently, a new wing was added to the temple. The entry took us down into the basement. 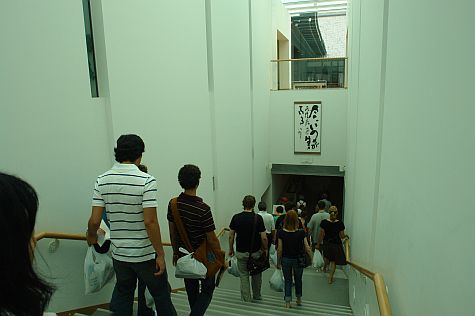 The lecture theatre was playing a movie about Buddhist history. It’s open to the public … but English subtitles to the Japanese weren’t provided. 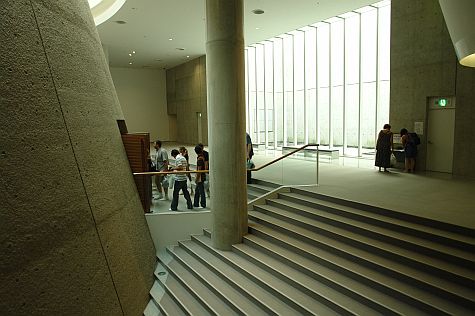 Back upstairs, a gallery overlooked the well-kept east courtyard. 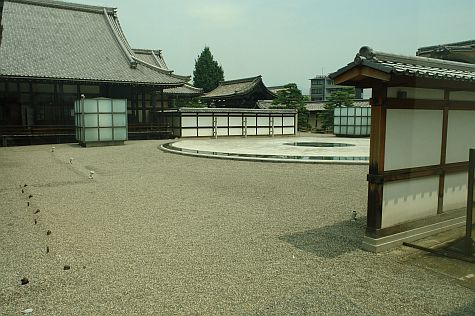 Leaving the temple to the east gives a good view of the old and the new, with Kyoto Tower. 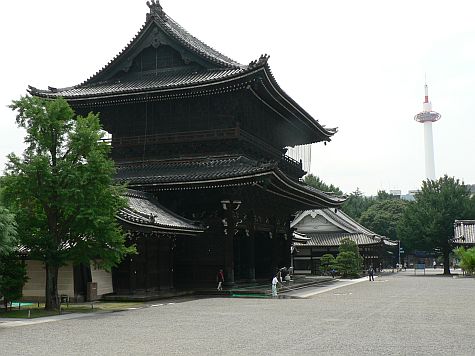 A little while later, walking down the residential streets in eastern Kyoto, we came to the entry of the Ayako Tenmangu shrine. 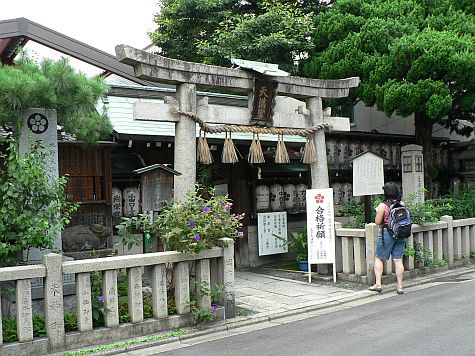 Inside, to the immediate left, was the water basin common in Shinto temples. 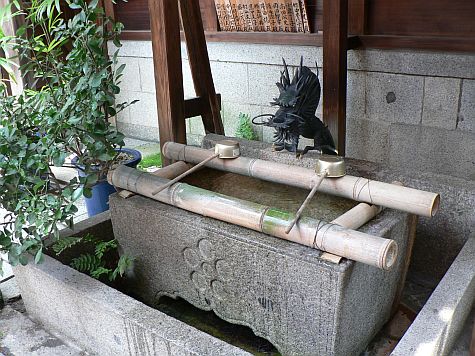 Turning to the right was the main hall. 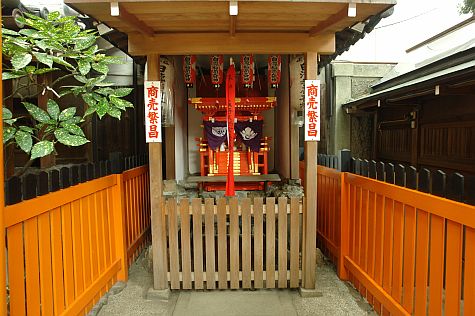 Next to the right, in line with the entry, was the offering hall. The procedure is to put some money in the offering box, clap your hands to wake the spirits, ring the bell, and pray. 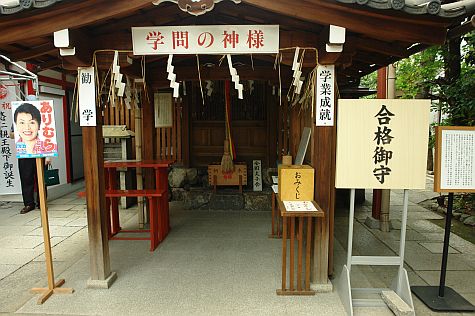 To the right is the founder’s hall, including a statue of the woman who had taken care of the temple. 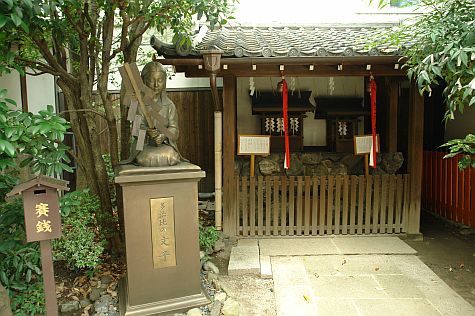 Diana looked at the various charms offered for sale. These were available on the self-serve honour system at this temple, but since we don’t read Japanese, the specific type of good luck wish (e.g. good studies, safe driving) were a guess. 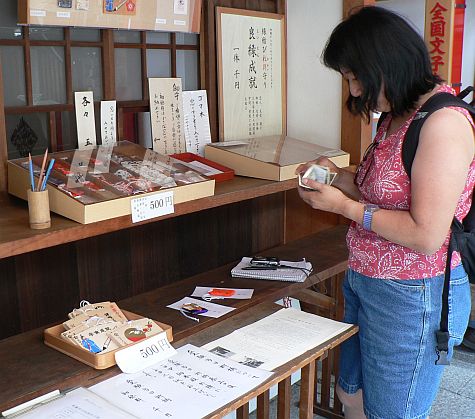 A little further along, we came to the front gate of Choko-Do. We entered by the small door to the left. 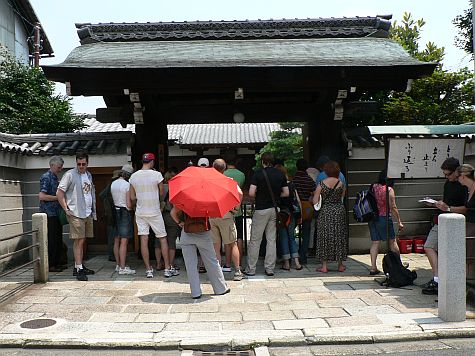 Most temples are private to a few families in the neighbourhood. The main hall here wasn’t open to us. 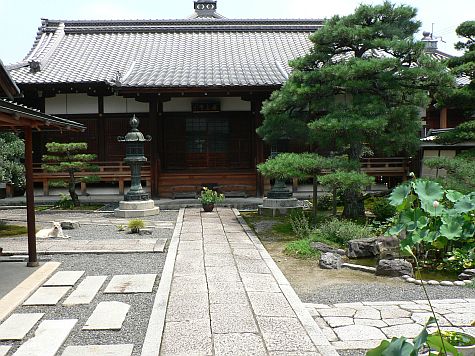 On the other side of the fountains was the cemetery. The boards with writing on them commemorate the anniversary of a death. The more boards, the more honoured. 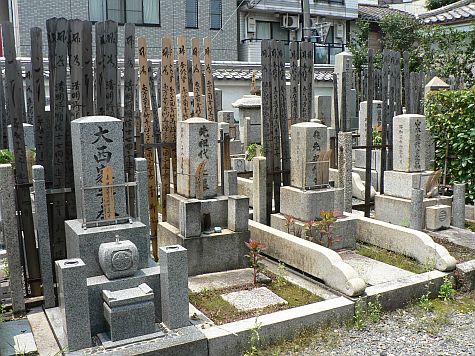 Continuing the walk, we got some shade by a canal flowing into the Kamo river. 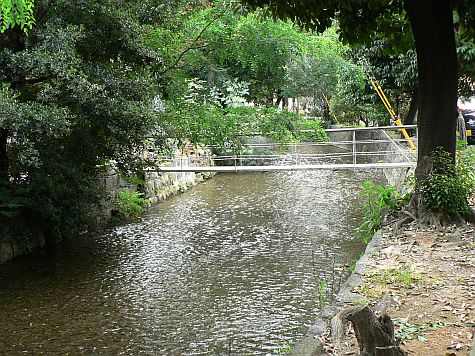 The final temple on the walking tour was the Toyokuni Shrine. The large torii marks it as Shinto. 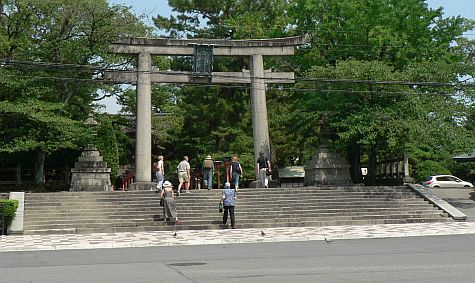 The main hall was ordered to be demolished by a shogun, and was later rebuilt. 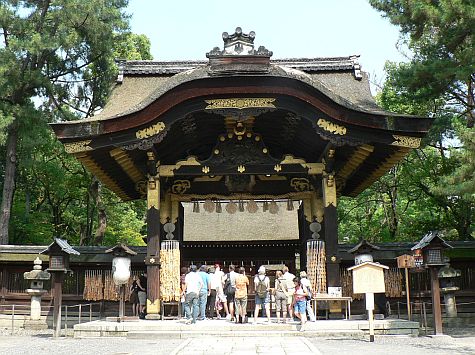 Through the courtyard is the offering hall. 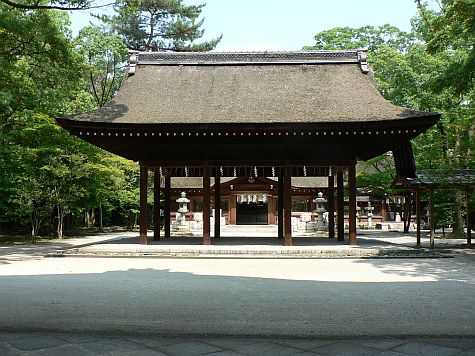 On the edge of the property is the temple bell. In older days, the bell would have been rung continuously during an emergency. In today’s Japan, it’s rung only to wish in the New Year. 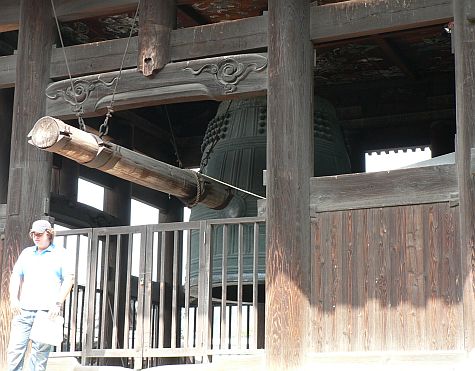 The tour of temples was educational to understand the culture of Japan. Shinto shrines that promote prosperity are visited often, and show more extensive features. Specific shrines are visited on specific holidays (e.g. with ritual house cleaning in the spring).