After the long guided tour, Diana and I were tired and hungry. We took a bus that went a circuitous route to Kyoto station, and then took the subway up to Shijo. We walked east to Teramachi Street, and had dinner in Mr. Young Man. 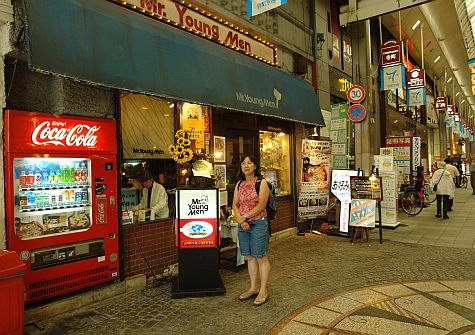 Ordering almost at random from the photographs on the menu, we had okonomiyaki and ramen. Okonomiyaki is a rather eggy pancake. Ramen prepared in a Japanese restaurant is certainly better than the instant noodles available in supermarkets, but still isn’t as good as soba or udon. After we ordered, we saw some westerners offered the English menu.

The Teramachi arcade is an enclosed street with little stores of all types. We weren’t really in a buying mood, but it’s fun to window shop. 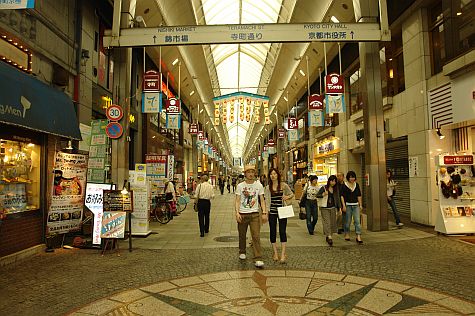 One of the storefronts led to downstairs to a pachinko parlour. Lots of flashing lights and ear-splitting noises. 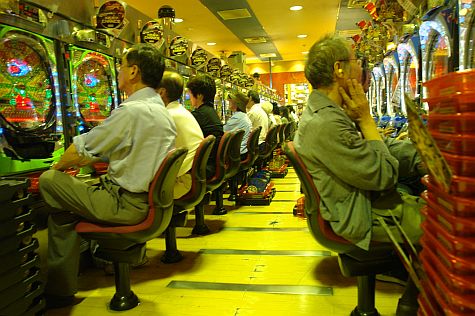 I haven’t figured out how pachinko works, and don’t really understand the thrill. Attendants are available to sell buckets of balls. In some aisles, western-style slot machines are as popular as the Japanese game. 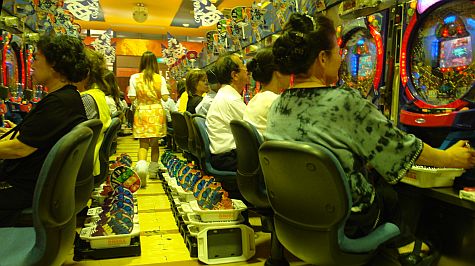 As a cross-street, the Nishiki market sells food. Since we were late in the afternoon, many of the stores were closing down. The stalls seem to be much like most markets in Asia, with each specializing in a particular product. 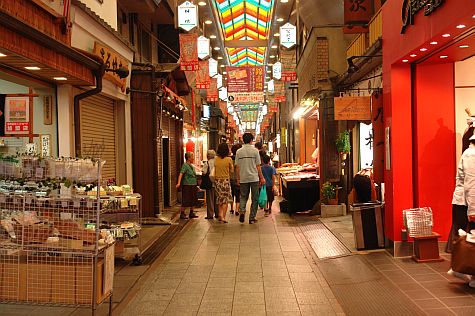 The alternatives for grocery shopping in central Kyoto seem to be convenience stores such as Lawson, or the basements of department stores. Either way, the layouts suggest that people don’t buy more than they can carry in their hands or on their backs. 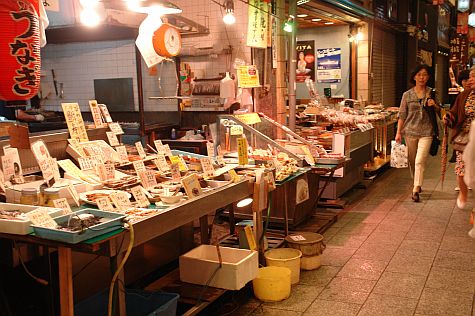 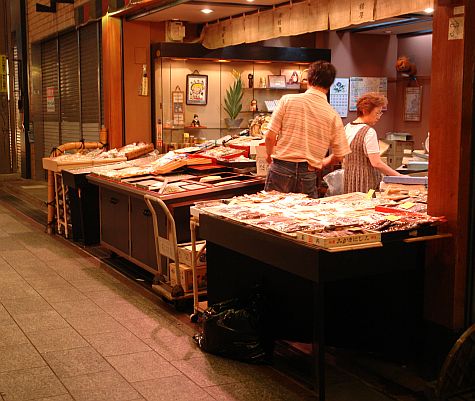 I didn’t recognize all of the dried products or nuts that were available for sale. 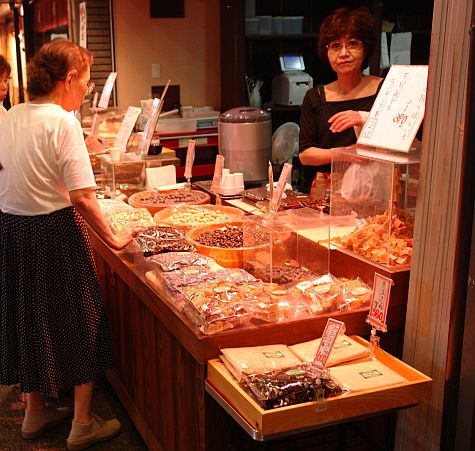 At the edge of the market was the Shin Kyogoku shrine, nestled amongst the other shops. 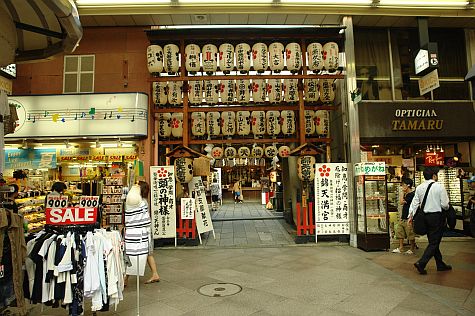 The bronze cow at the door means that worshippers can pray at this shrine for prosperity. That’s convenient, with many shopkeepers nearby. There’s the water basin common to Shinto. 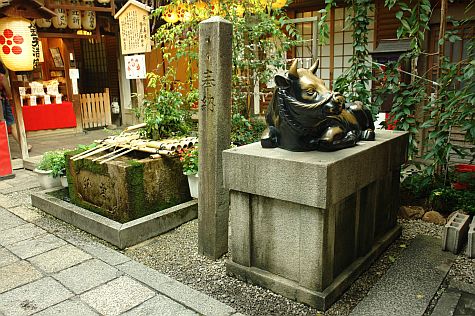 Diana shopped for some more charms. They seemed to be similar to the charms that we saw at other temples, and we didn’t buy any. 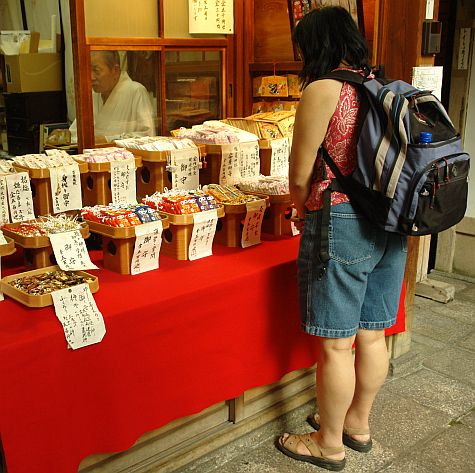 The Shin Kyogoku arcade runs parallel to the Teramachi. We strolled by more little shops. 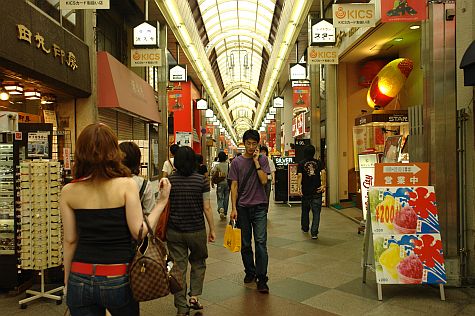 Diana looked at the rubber stamps to see if there was anything different from that available at home. She recognized some of the brands, and declared the prices higher than in Canada. 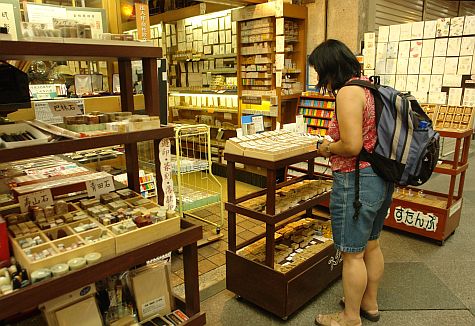 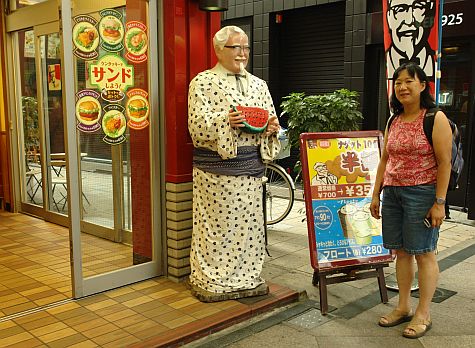 Diana is a bargain hunter, and thus wasn’t very interested in seeing the department stores. We did spent a lot of time the 100 Yen shops, where everything is that price, roughly about a dollar. This branch of Seria was in the basement. The challenge for Diana wasn’t finding cheap goods; it was finding products made in Japan. The bulk of the merchandise is made in China, and similar to that we might find in dollar stores in Canada. 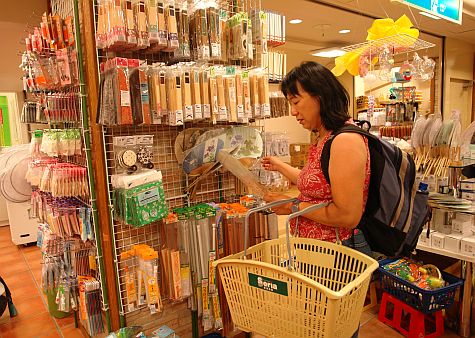 We walked back to subway on Shijo, the major shopping street in Kyoto. At dusk the streets were full of people. The big department stores are a contrast to those in the arcades that we had just seen. Although the streets are full of cars, the large number of bicycles parked at the edge of the sideway suggest the best way to travel in Kyoto.

With the sun setting on our first day of Kyoto, we had already covered a lot of the city. Refreshed with the late lunch and temperature dropping to comfortable levels, we continued touring to see the attractions of Kyoto at night.