Despite the rain on that Friday afternoon, Jennifer followed through with plans to take the visiting scholars north in Yorkshire to some historic towns. Driving from Hull on the inland highway past Driffield, our first stop was Scarborough Beach, on the south bay.  The town centre is a little farther north. 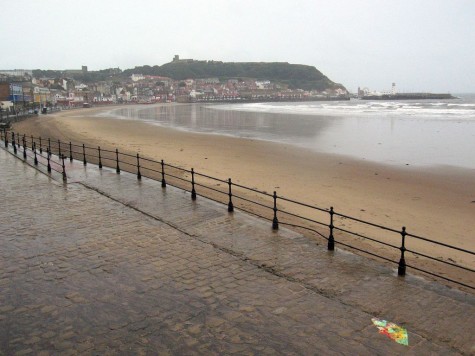 Zooming in, the arcade attractions to this resort town are visible on the peninsula. 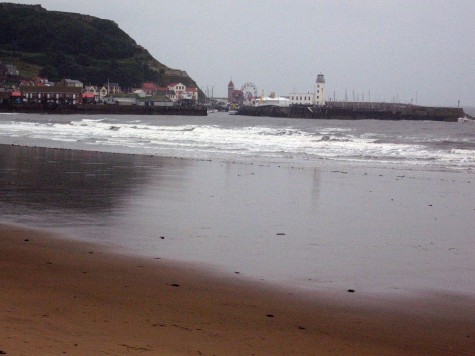 Just west of the beach, on the Esplanade, is one of the many resorts:  The Ambassador Hotel.  If the weather had been better, we might have ridden from the beach up to the top riding the cliff lifts (i.e. funiculars). 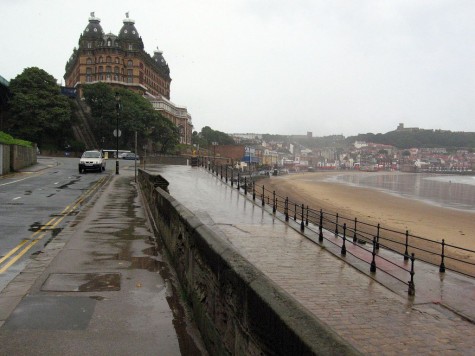 The wind was blowing strongly, so the merits and demerits of holding umbrellas was unclear for Jim, Thomas and myself. 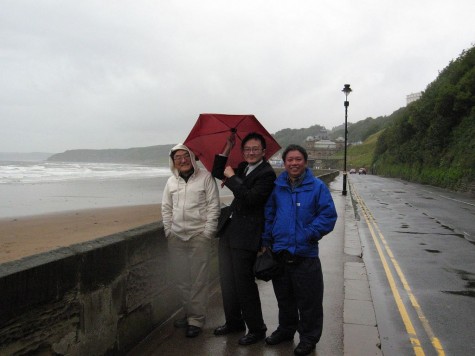 Farther south on the beach is the Scarborough Spa.  The history of the Spa goes back to the 1620s.  Today, it is occasionally used for some entertainment events. 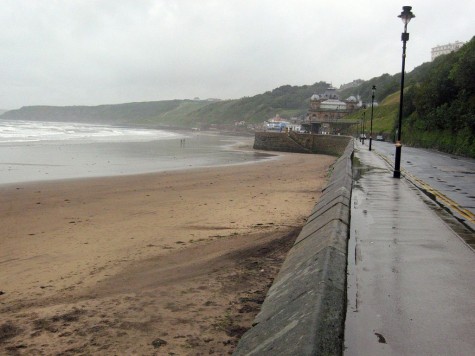 We got back into the car, and drove north through the town proper.  We bypassed the gaming establishments, for a brief pause at Scarborough Harbour. 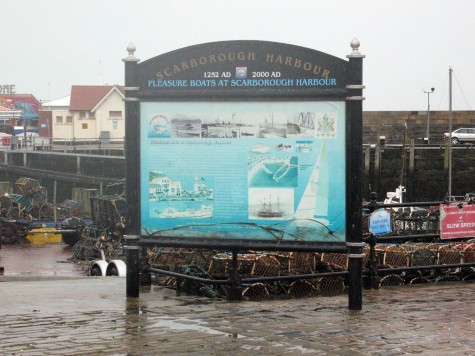 There seemed to be more leisure boats docked here than fishing boats. 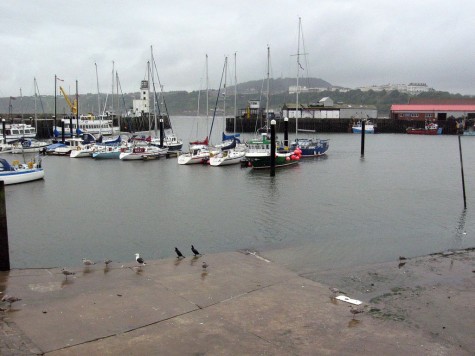 Restaurants and shops are across the road from the harbour, running almost all of the way down the pier. 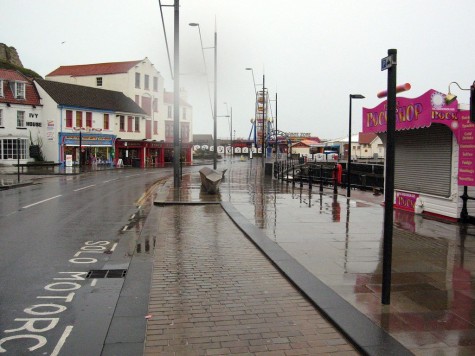 In clear weather, we might have strolled around some more.  We continued northwards to the next town.

Up to high ground, we did a drive-by the Whitby Abbey.  I would have like to have toured this 7th century monastery, but the prospect of parking at the bottom of cliff and taking the stairs up in the driving rain was not a reasonable option. 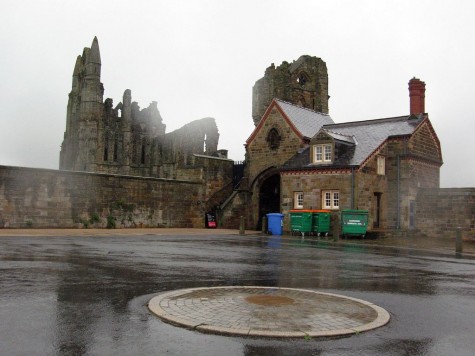 From the East Cliff, we drove back south and west, towards the town centre, to pause by the east bank of Whitby Harbour. 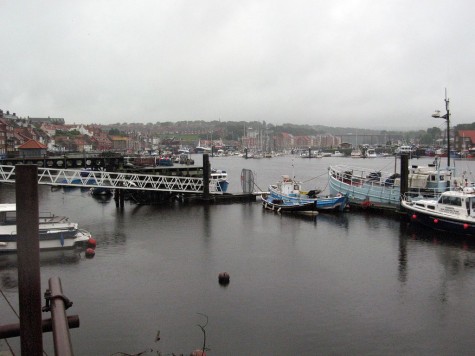 As compared to the pleasure craft on the prior stop, the boats in Whitby seemed more oriented towards commercial fishing. 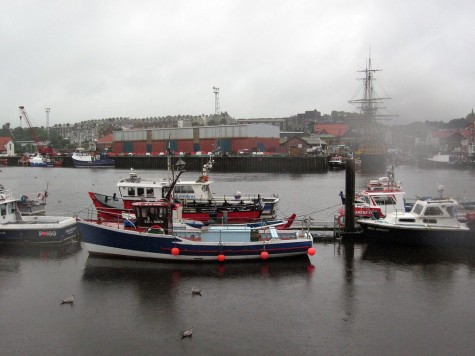 Seeing the town proper would lead us to drive over the bridge (i.e. Bridge Street). 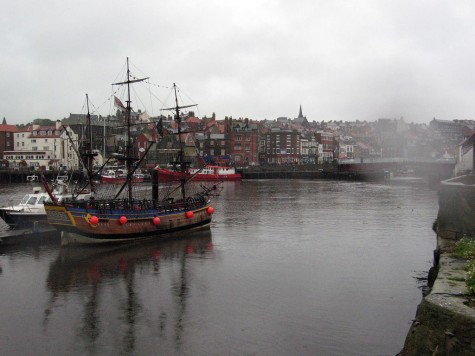 Docked on the west bank is a replica of the Endeavour, the ship that Captain James Cook sailed to the Pacific in the 1700s.  The HMS Endeavour was built in Whitby, although it’s not clear that Cook ever set foot on the ship while it was there. 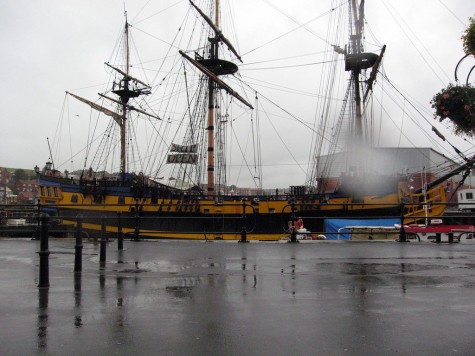 Heading further out of town to the West Cliff, is the Captain Cook monument.  The monument faces the North Sea, with the Whitby Abbey visible on the East Cliff. 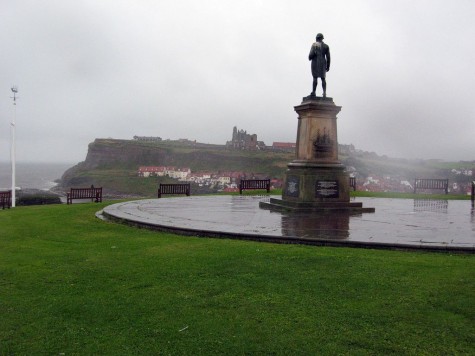 Down from the West Cliff, the piers extending out into the North Seas shelter ships and boats coming into Whitby Harbour. 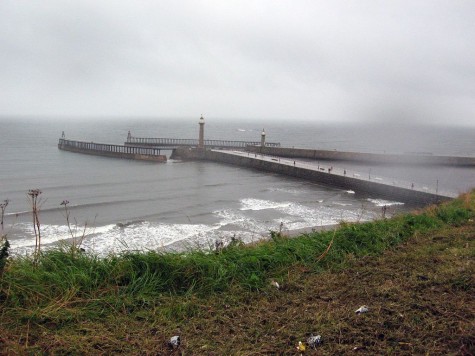 With rain continuing to pour down, we turned away from the coast to drive southwest through the North Yorkshire Moors.  In this national park, we drove through fields of purple heather and spotted some military listening posts at a distance.

By the time we arrived at Pickering Castle, the site had closed for the day. 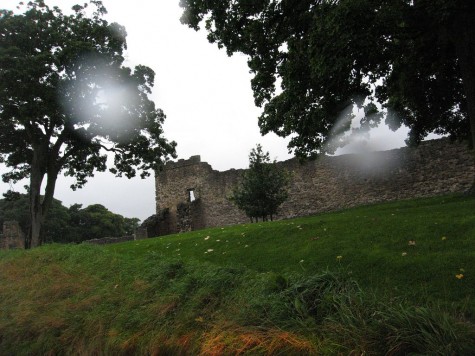 Again, with more time and better weather, I would have like to have seen this 12th century site. 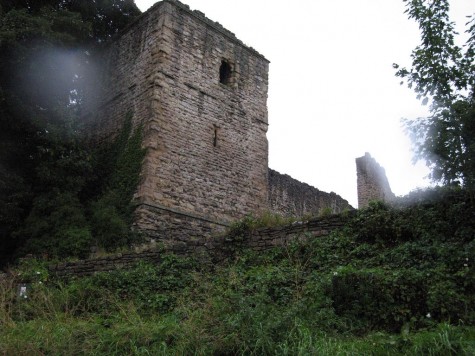 As a contrast of modernity, the next day, I accompanied Jennifer to one of the major shopping malls in Yorkshire:  Monk’s Cross.  The size of the parking lot would compete with many malls in North America. 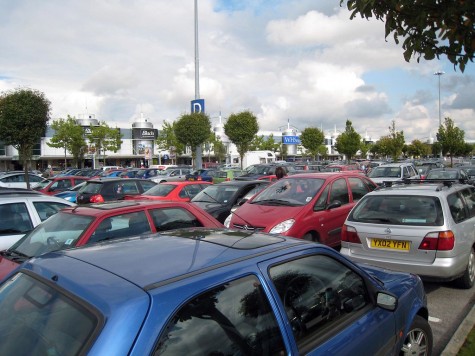 We bought some RAM to install in Jennifer’s Mac. 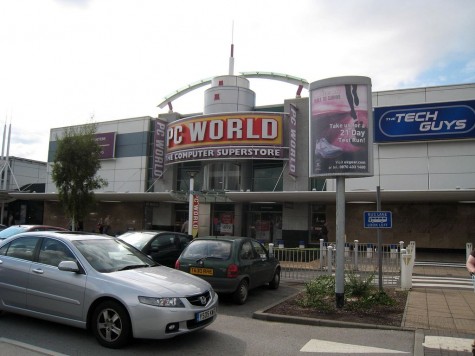 In the evening, in a tradition of curry as the national dish for England, Jennifer suggested that we try Ve Raj, nearby in the village of Shiptonthorpe.  The humble exterior elicited surprise when we entered the front area with a modern-looking bar. 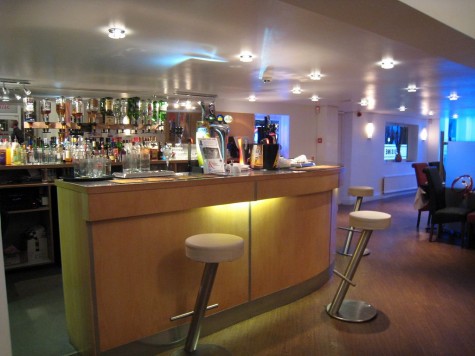 The restaurant is partitioned in a series of rooms, giving a more intimate feeling. 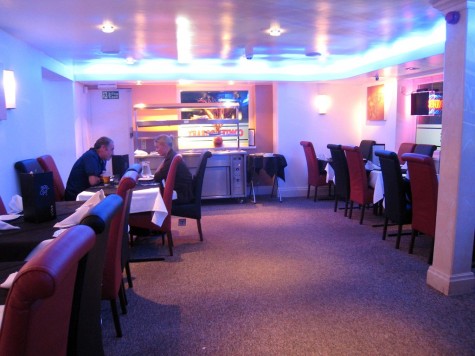 I wouldn’t normally expect modern landscape paintings in an Indian restaurant.  The dinner that night — I think that I had the balti — was exceptional. 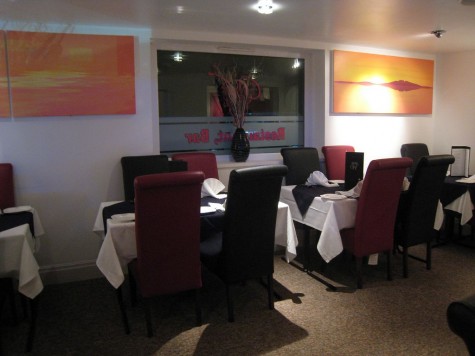 On this trip, I saw quite a bit more of England than usual, away from the bright lights of London.  If I told anyone back home that I was going to Scarborough, Whitby and Pickering, they would probably thinking that I was staying close to Toronto to visit towns founded by English immigrants to Upper Canada in the 18th century.