I saw a writeup on Bike Pirates, in Now Toronto. It’s not really a bike store. It’s an anarchistic place where bike geeks hang out, and can provide some advice while they lend you tools to work on your bike. I’ve mostly maintained my own bikes since I’ve been a teenager, but haven’t had the time to coach Ryan on fixing his bike. I thought that it would be a good place for Ryan to learn a few things. 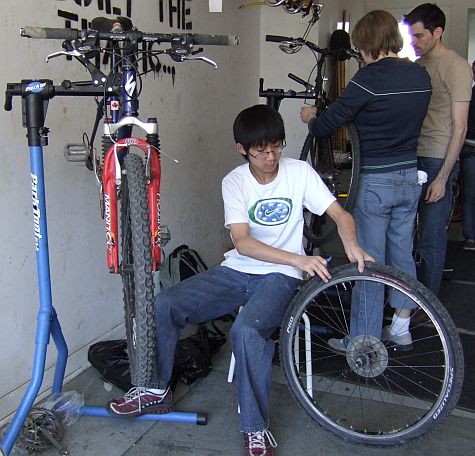 Ryan inherited an old Stumpjumper that had been ridden by Adam. I originally bought it at a pawn shop. The frame is really light, but the bike is old, and the parts could use some work. The biggest annoyance has been that the rear wheel is out of true, and more than one bike repair shop has said that it’s not fixable. 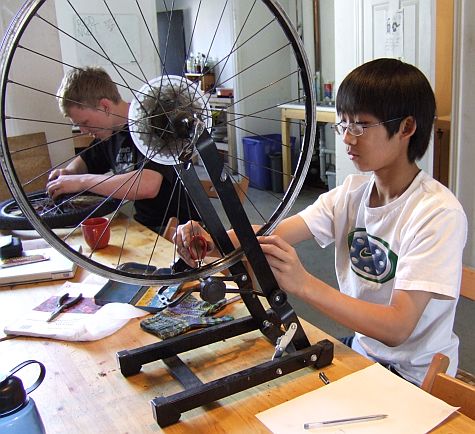 The guys at Bike Pirates said that the rim was high-quality — it’s a Mavic — and advised that it would be worth spending some time truing it. Unfortunately, I’ve never learned to true wheels, because that requires time and patience. It also involves lining up tensions in three dimensions, which is more of a challenge than I’ve been able to master. 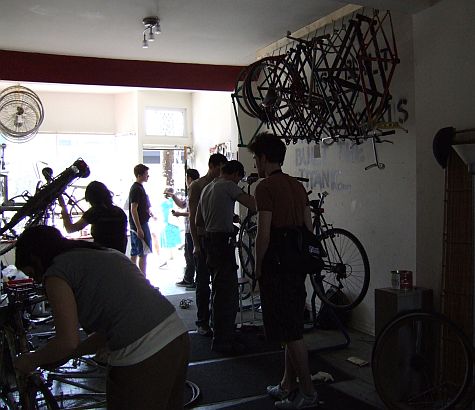 After a few hours of trying to true to the wheel, one of the Bike Pirates suggested leaving the wheel for one of the people who is really good with wheels. After 2 weeks, though, we hadn’t linked up with that person, so Ryan brought the wheel home. We stopped by Mountain Equipment Coop to pick up some more bike repair tools … and there now seems to be a regular group of teenaged boys working on bikes in our backyard.