Since I’ve been doing a lot of work in Drupal — the open source content management system — I went to check out the Toronto Drupal Users Group. I biked over to the early evening meeting over at the Linux Caffe. 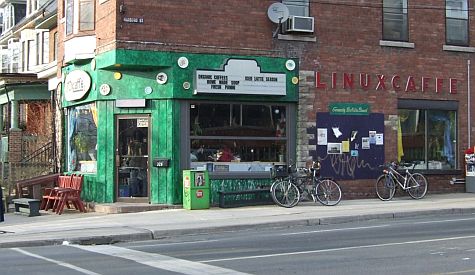 The open source community is considerable different from the corporate types that I’ve been meeting in my day job, for the past 20-plus years. There are a few people with degrees in computer science — and I’m quite comfortable in the university community — but there’s more people who don’t have that formal training. The user group is about sharing knowledge and helping each other out, which is refreshing.

One thing that I didn’t expect was that some major contributors to the Drupal community came to the meeting. The origins of Drupal are from a developer in Antwerp, but on the Internet, distances are small. Of course, there’s no reason that key communities members should live in Toronto … but I just never thought about that.

The Linux Caffe encourages various local open source user groups to meet there. Since I was running late for dinner, I decided to order a sandwich and drink. Open source means free, as in liberty, but communities should remember that supporters still need to make a living.