My colleague Antonio lives in New York, but despite his personal passion for guitar, he doesn’t take full advantage of the entertainment in town. The New York Guitar Festival had some special events to add to the local talent. From Austria, Wolfgang Muthspiel was scheduled for two nights at the Jazz Standard, playing in different combos. On this evening, he was accompanied by Larry Grenadier on bass, and Chris Cheek on sax. 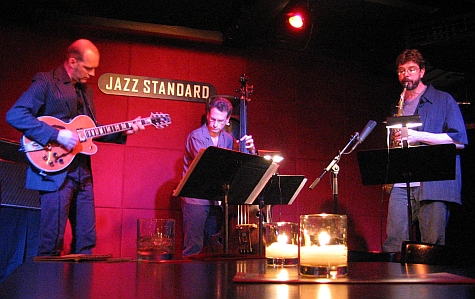 The performance was great. Muthspiel said that the trio is working in the studio, so maybe we’ll hear them recorded someday.

Antonio was entranced by Muthspiel’s technique. I’ve lent him a copy of the introductory Berkelee guitar method to help him up the learning curve.