Exactly one week after returning from Finland, a small part of it followed me home! Anssi is a colleague at the Helsinki University of Technology with a similar interest in services research. He was spending a day in Toronto on his way back home from the McMaster World Congress. I suggested that we might go out for dinner with the family, because Chinese food is better in large groups. In discussion with Diana, we expanded the choice set, because great Vietnamese food is also a rarity in Finland. 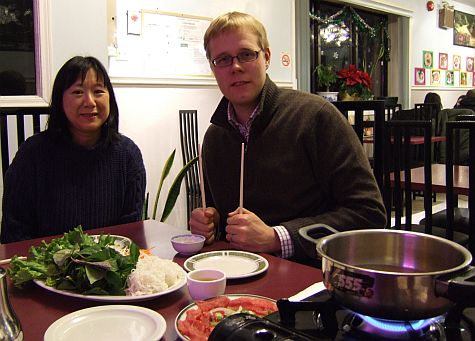 Diana and I had previously had beef 7 ways â€” bo 7 mon â€” on Dundas Street in Chinatown. We liked the meal, but didn’t like the venue. I did some searching for an alternative restaurant, and ended up phoning a series of Vietnamese establishments to ask specifically for bo 7 mon. On the fourth call, Rua Vang (also known as Golden Turtle) said that they did serve bo 7 mon, so based on some good reviews, I suggested the change to Anssi.

Rua Vang is west of Chinatown, so it’s not the most popular neighbourhood. The restaurant is casual, so we chose our own seats. After we ordered bo 7 mon, the waiter suggested that we move to a larger table. He set up a burner with a pot of broth, and brought a plate of lettuce and noodles, some servings of raw sliced beef, and fish sauce. The waiter then brought a package of rice paper and a large bowl containing hot water. Since it was clear that we weren’t really familiar with the procedure, the waiter demonstrated. 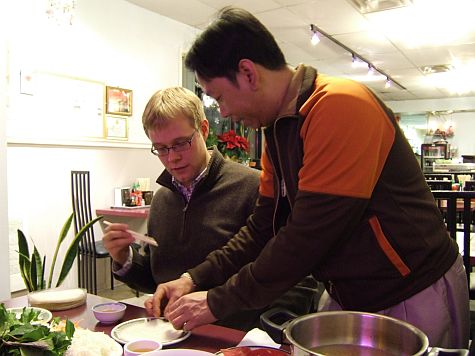 The pattern was: put some beef in the broth to cook, soften a sheet of rice paper in the hot water, then bundle the beef, beansprouts, lettuce and noodles inside the rice paper. Dip the roll in some sauces, and taste.

Before we managed to get halfway through cooking the beef slices, two more plates — presumably with beef another six ways — appeared. The other ways included: beef wrapped around prawns; beef sausage; beef meatballs; beef cubes; … and some other ways I can’t remember. Each of us had our own preferences, but we all agreed that the meal was great. We decided that we needed a little more food, so we ordered some crispy fried noodles with chicken. It was similar to Chinese crispy noodles, but with a slightly different, and delicious flavour.

Over dinner, we got the opportunity to learn about each other a little. Although Anssi and I were at the same meeting together last August for the better part of a week, we haven’t really had much social conversation. Home is in Finland, but Anssi and his wife spent two terms living near the campus at Berkeley, and ate out frequently in the great cheap restaurants there. As usual, I revealed that I’m older than I look, which led to the conversations about my mixed academic and business career.

When we left the restaurant around 8 p.m., the place was packed with customers. Lots of families, some with kids sleeping in carriages. We decided to conclude the meal by driving up to the Annex for dessert at the Future Bakery. Anssi liked the relaxed atmosphere, and we worked our way through some huge servings of cheesecake and pie. Since it’s near the university, the place was full of students and urban life. We were seated next to two young women, one of whom was sketching Anssi’s profile in pencil. Anssi said that he missed the similar atmosphere at Berkeley, and that similar venues don’t exist in the Helsinki area. I hadn’t thought about it that way … but when I’m in Finland, I don’t generally just hang out in the evenings.

We gave Anssi a bit more of a tour, driving him down St. George Street through the University, and through Chinatown on Spadina Avenue. It was a nice evening out. Since we’ve had kids, Diana and I haven’t taken advantage of Toronto’s restaurants as frequently as we used to.