Toronto has a good music scence … if I’m in town to see it!

I called Andy, and asked if he wanted to go to The Rex to see Tara Davidson (an upcoming sax player) at her CD release performance. She was playing with Mike Murley (veteran sax player) and David Braid (keyboards). 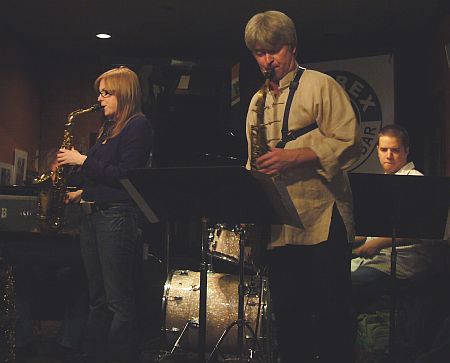 This show was relatively relaxed, as The Rex is casual, and all of these players know each other well as students or teachers from the Humber College music program!

Taking photos under low light conditions was a hard test for the Panasonic FX01. At ISO 400, blotches show up. Here’s an ISO 200 picture, resized and lightened slightly. The Image Stabilization seems to have helped, because the photo as taken at 1/8 second at f3.6 . (I would have used the full f2.8 aperture, but the camera doesn’t have any manual controls to set that!)