Signs of gentrification: speed bumps and Starbucks.
In 1988, my office relocated from North York â€” north of Highway 401 and east of the DVP â€” to a bank tower downtown in the financial district. Since I hate commuting, we stepped up from a Willowdale condo to our current house, located south of Queen Street and east of the Don River. I remember that a former marketing director from Claritas said that I was living “kinda bohemian”.

It’s an indicator when the New York Times publishes that “Queen Street East is the new Queen Street West”. The area is called South Riverdale, and we’re either at the eastern edge of “Riverside”, or the western edge of “Leslieville“. Besides the explosion of restaurants down the street from us, I’ve noticed two other signs of gentrification in our neighbour. 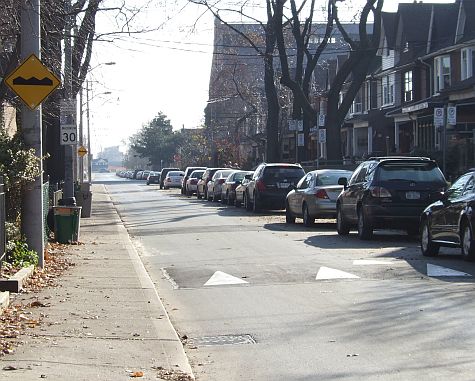