I didn’t get to the CD release of Michael Occhipinti’s “Chasing After Light” album, but caught up to him at a performance of the “Sicilian Jazz Project” at the Luminato Festival at the Distillery District.
I enjoyed jazz guitarist Michael Occhipinti‘s 2000 Creation Dream: The Songs of Bruce Cockburn album, where he reinterpreted the compositions of Bruce Cockburn (who is a pretty great guitar player, himself!) With the same group of musicians, Occhipinti recently released a new album Chasing After Light. One of the disadvantages of travelling so much is that I sometimes miss performance that I’d like to see in town. Occhipinti plays in (and leads) many different permutations of musicians, so I noted that he was scheduled with the “Sicilian Jazz Project” for the Luminato Festival. 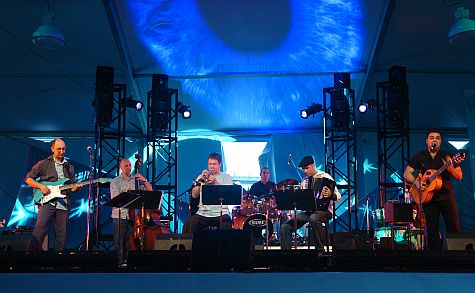