After a long day on Saturday, I got a slow and relaxing start on Sunday with Martin, saw more English countryside on the trains, and got a tour of York highlights with Jennifer.

Martin had said that on Sunday morning, there was a church that I might enjoy, “not for worship, but as a stunning place to chill out”. I have to admit to not knowing Martin very well before this trip, and didn’t know exactly what to make of this before I arrived in Nottingham. It turns out that church has been completely renovated into an elegant restaurant — the Pitcher and Piano — and it serves brunch. In my quest for local cuisine, I had the lamb roast, served with more altitude than traditional English servings.

Martin dropped me off at the train station, making sure that I got onto the right track. Unlike my usual behaviour on airplanes, I didn’t feel much like reading or listening to my minidisc player, so I just people-watched and looked out the window at the English countryside. On the first leg, I was seated across from a mother, her one-year-old and four-year-old sons, and her aunt. I could barely understand their English through their accents. I try to not judge parents on their child-rearing styles, and was amused at the mother handling the four-year old. (The aunt claimed that he was a terror). The young boy wanted one of the the baby’s toy, and it was a battle of wills with the mother. My intuition tells me that her sons will grow up to be more competitive than mine.

I changed trains at Chesterfield station, onto a Virgin train. (They have nice interiors, and LCD panels over each seat indicating reservations). There were three young men travelling together, having fun and showing videos to each others on the mobile phones. They must have been 19-year olds, on their way to begin training in the army. I asked if they thought they would see action, and they said that the army was a “great way to see the world”. I didn’t press my view of the world on them, but got to reflect at the optimism of leaving small-town life and leaving the familiar behind. In my day, though, we didn’t have mobile communications for family to phone us up to say final farewells. 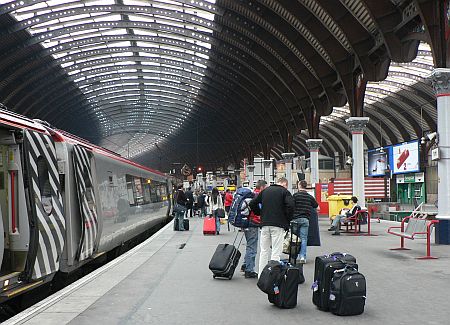 At York station, it seems that pay phone has become an extinct species, so the gentleman at the information booth allowed me to use that phone to call Jennifer. She was just minutes away. I thought Jennifer’s car — a Renault — was interesting, because we don’t see any of those in North America. We decided to take a quick look around York before heading off to Jennifer’s place in Pocklington. Since my usual walking tours are around markets and museums, we headed for the city centre.

I had read a lot about the Shambles on the Internet, and I like to walk urban areas. The area has many of the original features from medieval days, although the butchers that gave the area the name have long since departed. The cobblestone streets were actually wider than I had expected. Most shops were closing in the late afternoon, but I wasn’t looking to buy anything, anyway. 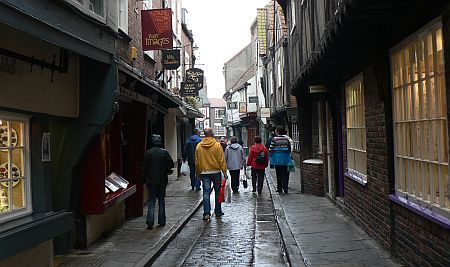 Jennifer led me over to York Minster. Describing York Minster as a cathedral is an understatement. Any one of the four or five major gathering places could easily be described as a cathedral with some grandure. Services were in session while we walked around the other areas, and we got to watch the choir promenading out. Unexpectedly, these students from the Minster School choir were all girls. 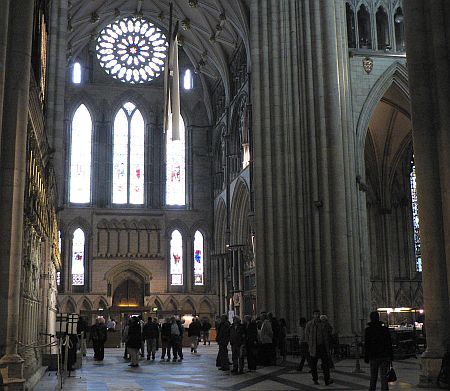 The drive to Pocklington revealed more of the English countryside. I saw lots of fields of yellow flowers, which I guessed as canola — known as rapeseed in the UK. Jennifer says that when the crop is mature, it emits a foul odour, so it’s possible to smell harvest season.

At Jennifer’s house, I unfortunately usurped her son Cameron from his bedroom, as he got to stay in the livingroom for the week. Jennifer’s house is in a small subdivision outside the centre of Pockington itself.

(See more of York on the snapshot server in our basement).