Walking south from the Ginza district is Shimbashi station, and beyond that is Shiodome. The Dentsu building — the headquarters of a major Japanese advertising agency — is a skyscraper with sharp angles. 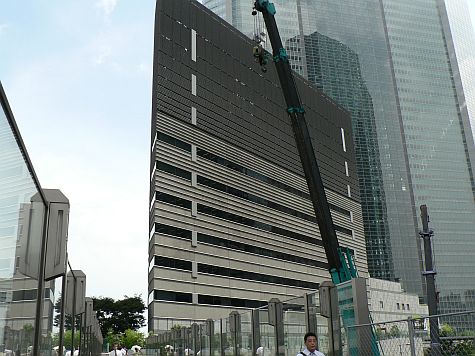 On the lower floors of the Dentsu building is the Advertising Museum Tokyo. 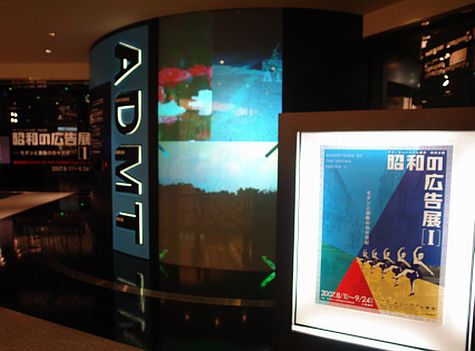 Their collection dates back to the Edo period, and traces through to modern advertising. Resting up from our continual touring and the heat, Diana and I watched a few years of “best ads” on the interactive video displays … until we decided that watching commercials wasn’t the best use of our time in Japan.

Continuing south from the Dentsu building is the Caretta Shiodome complex houses shopping and restaurants, in addition to the Dentsu Shiki Theater. The Broadway production of Wicked seemed to be a hot ticket, with displays promoting the show in the courtyard outside. 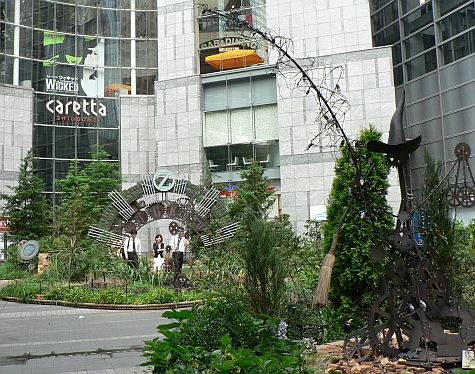 The other attractions were farther afield, so we got on the subway.

We weren’t so interested in the shopping in the Roppongi area — the shops are in the class of Beverly Hills — but there is a cluster of interesting art museums there. Had we known the subway routes to the National Art Center better, we could have reduced our exposure to the August heat by going to Nogizaka station on the Chiyoda line. Instead, we went to Roppongi station on the Hibiya line, and walked downhill for 20 minutes, to approach the National Art Centre from the southeast side. 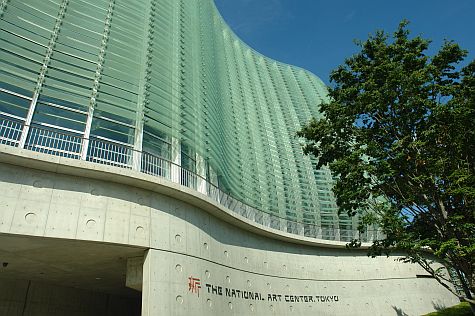 A path led up to the entry for the building, and the ticket booths on the northwest plaza. The center is large, with multiple shows running concurrently, so we were slightly confused at which show(s) we had come to see. 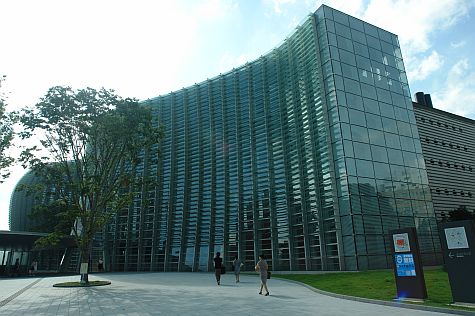 The atrium of the center opens up to three levels of galleries, with a restaurant on a circular platform up top. 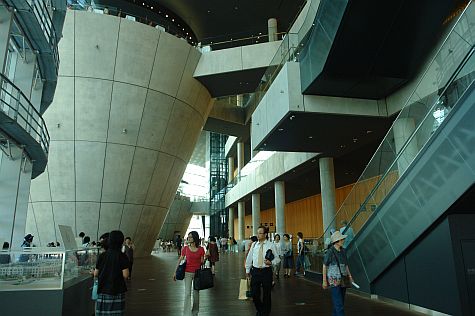 We toured through the 100th Anniversary of the Nitten, but the evolution of traditional arts from postwar Japan didn’t really interest us. We were more intrigued by Skin + Bones: Parallel Practices in Fashion and Architecture, a show originating from the Museum of Contemporary Art, Los Angeles.

Looking north from the National Art Center is a clear view of the Mori Tower, part of the Roppongi Hills complex. 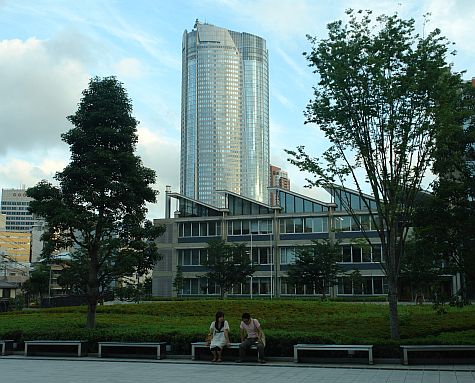 Roppongi Hills has upscale shopping and a first-class hotel. In our tourist dress of shorts, sandals and knapsacks, we weren’t positioning ourselves as credible clients. 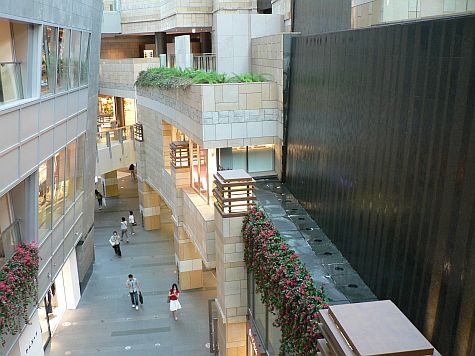 Up in the tower, there are three attractions. The Mori Art Museum was completely taken up by a large exhibition on Le Corbusier: Art and Architecture, A Life of Creativity. We donned audio guidebooks, and spent a few hours tracing the life of this (in)famous architect. In my reading, Le Corbusier is renowned for his modernism, designing structures without the consideration “as if people mattered”. I was amused at the idealism of the Modulor scales, where apartments designed for “perfection” for the French would have been corrupted to allow for Germans two to three inches taller.

The second attraction — Sky Aquarium — seemed pretty much for little kids. We bypassed that for the third attraction, Tokyo City View. Looking east, we could see the Tokyo Tower, the Japanese version of the Eiffel Tower. The harbour and Ginza district are also over that direction. 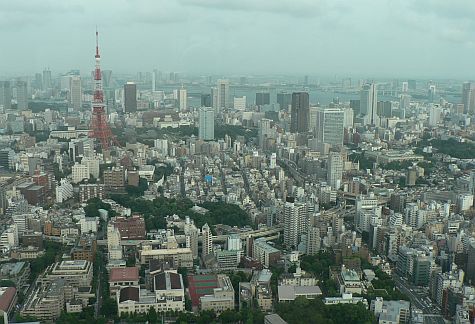 The north and south views were much the urban skyline of low rise buildings and skyscrapers typical of Tokyo. The west view gives an overview of Route 3 (the Shibuya Route) of the Metropolitan Expressway. Since subway and rail are so extensive in Tokyo, we never rode on the expressway. 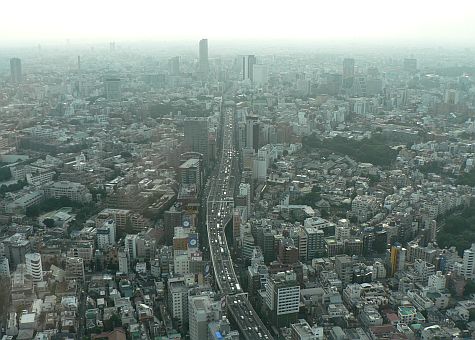 From Roppongi, we took the subway back out to Harajuku. Although we had been in the neighbourhood on a previous day, we had arrived too late to shop at Oriental Bazaar. With the promise of finding gifts made in Japan, Oriental Bazaar became a destination on our itinerary. 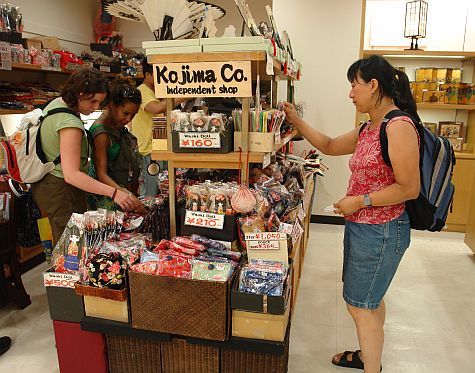 On the main floor is a selection of Japanese-made dishes, which we thought a bit heavy for air travel. In the basement, we found an small independent store with a good variety of handmade goods. 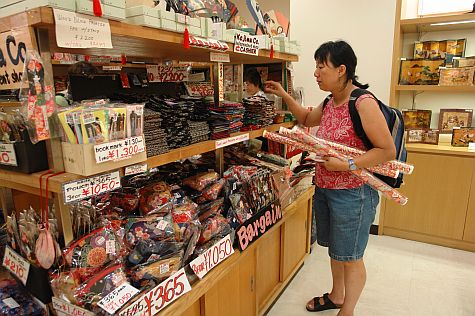 Diana stocked up on gifts, especially for her nieces. 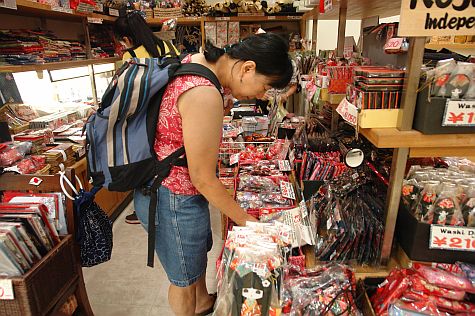 These long subway excursions effectively marked the end of our planned vacation in Japan, but not quite the end of our stay. After four nights in Kyoto and seven nights in Tokyo on the Ginza, we reoriented our accommodations (and mindset) towards the original motivation for coming to Japan: the ISSS 2007 meeting at the Tokyo Institute of Technology. Diana had a few more days before moving on to Vancouver, and I had another ten days.