Having arrived in Kyoto late on Tuesday night, we only had three touring days before our Saturday morning 11:00 shinkansen — bullet train — for Tokyo. With our big suitcases, we opted for the small luxury of a taxi to Kyoto station. The driver took us around to the back (south) side of the station, near the shinkansen gates. 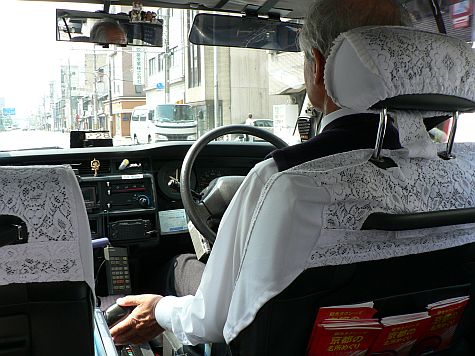 We were running a bit low on cash, so I left Diana to go look for an ATM. I had remembered one in the front (north side) of the station, but a sign there directed foreign ATM cards to a machine in the basement of the Kyoto Tower. Diana wondered where I had disappeared to, for 20 minutes. When I returned, we went through the automated turnstiles with our tickets. 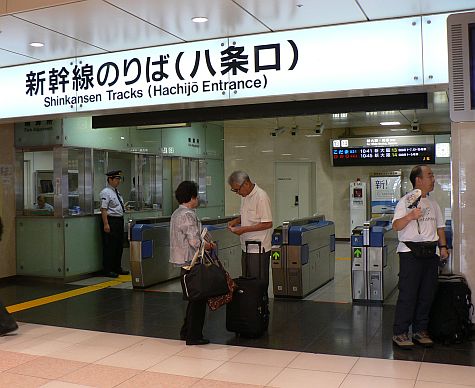 To get up to the platform with our heavy luggage, we followed signs for an elevator, and then another. I think that we might have exited the secure area when we changed elevators — we seemed to be in the middle of the shopping mall — but I guess that the Japanese would rarely try to steal a ride (and there are conductors checking tickets on the train). The train platform had a few enclosed rooms with air conditioning, but they were rather full 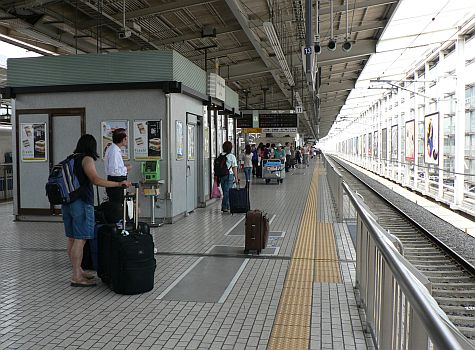 The shinkansen was a comfortable ride. Taking photos out the window didn’t work too well, as electrical poles run next to the rails. Kansai is geographically a plain, so we saw lots of fields with farms, with the occasional village. 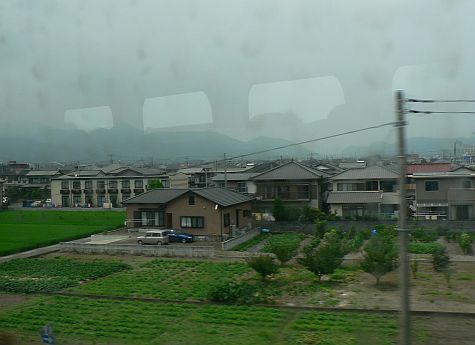 We might have seen Mount Fuji in the distance, after 30 to 45 minutes on the train. The route then ascended through some tunnels into a more elevated area. The train turned southeast to follow the sea coast, and we briefly stopped at a few major cities.

When we arrived at Tokyo Station, we followed some signs towards the subway. We were destined for our hotel near the Ginza, so I was sure that we wouldn’t have the same long-distance walk as when we arrived in Kyoto. When we encountered construction within the station building, and then set of stairs, our sense of adventure eroded. We took a short taxi ride to the Courtyard Tokyo Ginza.