Since I’ve been classified as an enneagram type 5, I have a reputation for scoping out lots of restaurant choices before I get to places that I’m visiting â€” whether I’ve been there before, or not! Portsmouth has a reputation for having good restaurants. It’s easy to check for comments at Chowhound, and I often cross-reference to an alternative newspaper (which in this case would the Portland edition of the Phoenix).

Unfortunately, the corporate meal guideline of $32 for three meals per day in New Hampshire doesn’t seem to be enough when Portsmouth restaurant entrees are $24 without tax and tip. This is how, despite the fact that I don’t drink beer, I recommended that the consulting team â€” flying in from around the country â€” meet at the Portsmouth Brewery for dinner. 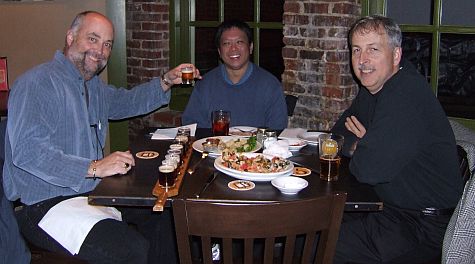 This was the first time that I met Kerry, and we decided to order food first because Bill was running late. I chose jambalaya (without shrimp) that turned out to be a well-prepared dish. When Bill arrived, he was convinced to try to sampler of 8 beers (as well as the jambalaya … joking that he’d take my extra shrimp).

Bill said that since the sampler has such small glasses, the total consumption is actually equivalent to only two beers. Since I recently embarrassed myself on two ounces of wine in Finland … I’ll have to take his word for it.