The family got together for a casual lunch at the Ka Ka Lucky Seafood BBQ Restaurant on Broadview. Eric invited Terra, and Noah invited Sandy, so that their grandparents could meet the girls. 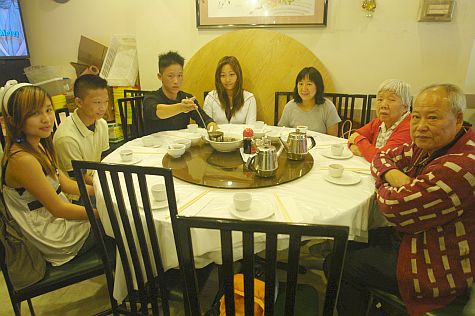 We ordered enough dishes to feed the table … and then ordered some more for Noah and Eric after everyone else was full. As always, the food was fresh and tasty.

Since both Adam and Eric had spent a few weeks in the summer up in Gravenhurst and Lagoon City with their grandfather and grandmother, it seemed like Noah’s turn this summer. Noah is at that age where he’s a bit too old for summer camp, but not quite old enough for a summer job. His grandfather doesn’t have the store in Gravenhurst like he used to, but there’s always a few odd jobs where he could use a hand.

Later that day, Noah packed up some clothes — and extra food, because he eats more than his grandparents combined — and went up north for two weeks.