On our second day in Japan, we hopped on the bus to Kyoto Station, and navigated to the south platforms for the Kintetsu-Nara line. We went into the train office to ask directions, and were told the precise time that the next train would leave for Yamato-Saidaiji, where we could then change for a local train to Nara. 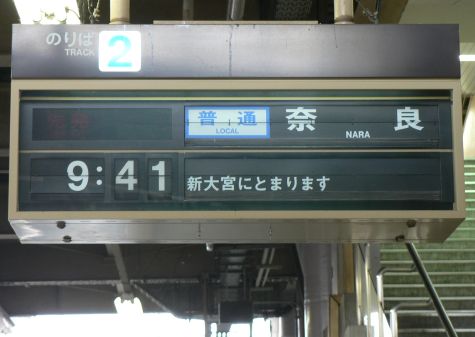 The train change was easy, but when we arrived at Nara Station, it took a few minutes to orient ourselves to the bus stops. When we figured out that we wanted a bus westbound (uphill), we tried to board using our Kansai Thru Pass. Discovering that Nara buses don’t accept the pass, we dropped a few coins in the box. The bus ambled up hill and made a few stops. Just guessing that we actually had entered Nara Park, we took a chance and got off the bus. We saw some of the famous deer across the field to the north. 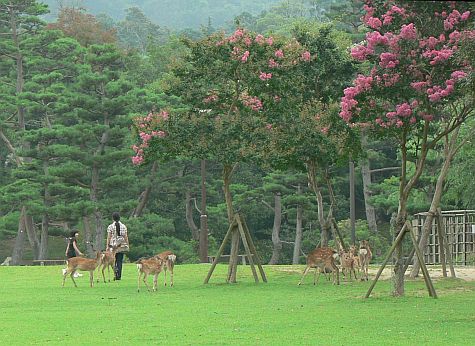 The entry to Toda-ji was just south of the field. On our way towards the temple, we noticed deer looking for food from tourists, and a woman was surprised as the deer tried to get into her purse. 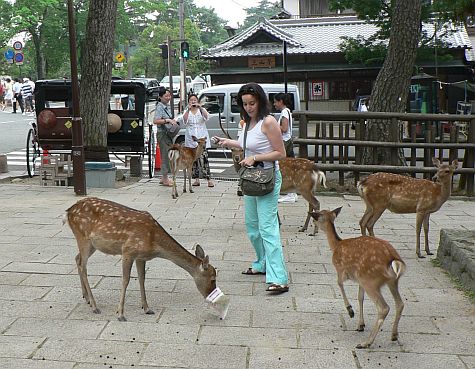 Turning west on the walk towards the temple, vendors sell food for the deer from carts. The deer know there’s food nearby, so they hang out waiting. 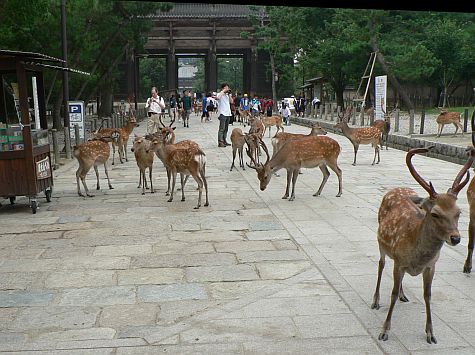 Ancient Nara is a UNESCO World Heritage site, with a large market to denote that. Deer lounge nearby. 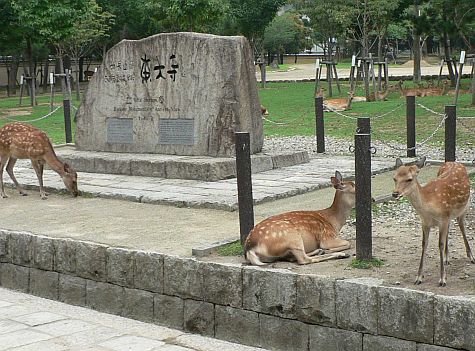 Farther down the walk, the number of deer declined. A herd of another species approached. 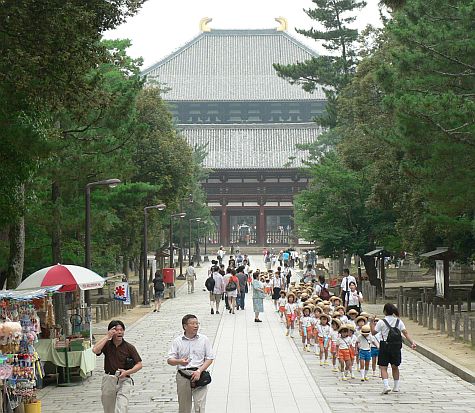 At a young age, it may be hard to tell boys from girls in those hats, so it’s good that their uniforms are different colours. 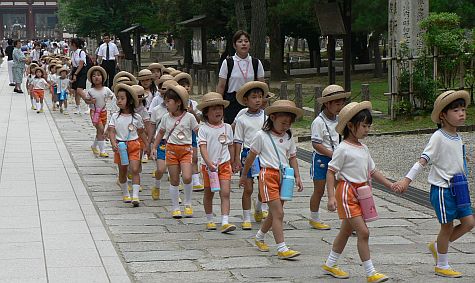 The admission to the Toda-ji temple was at the left of the main gate. 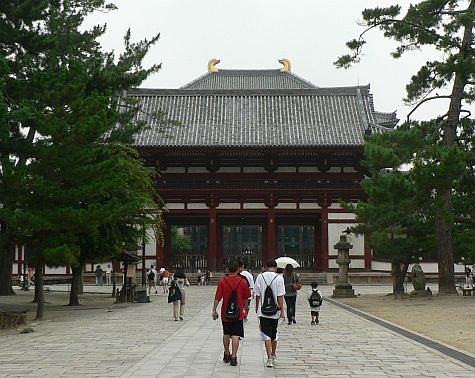 Inside the front gate was an urn for burning incense, common in Buddhism. 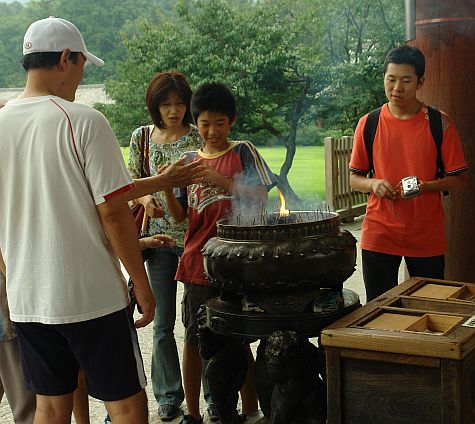 The big Buddha is inside the main hall at Toda-ji. 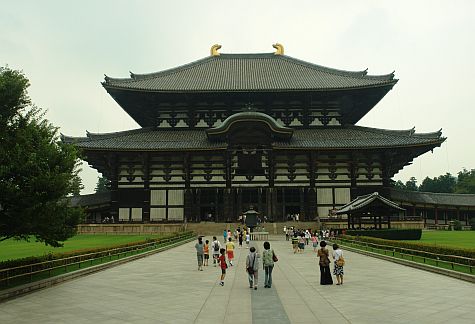 Approaching the main hall, the water basin representing Shinto was popular on the hot and humid day. 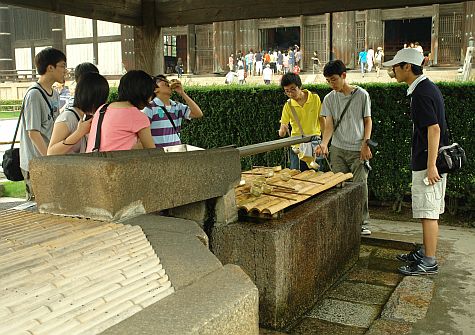 Just before entering the main hall was another urn for incense. 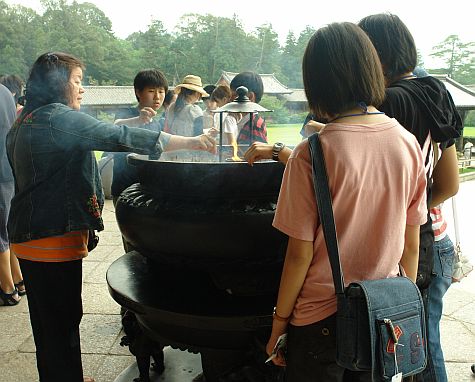 The Buddha is immediately at the front entrance to the hall, making photographs difficult without an extremely wide angle lens. 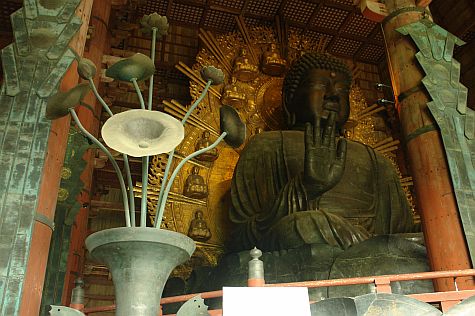 To the left of the Buddha is a Bodhisattva. 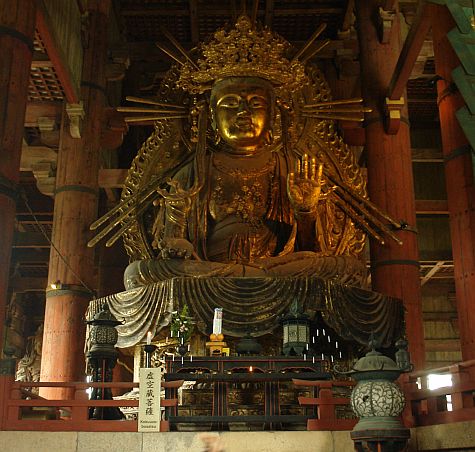 Continuing the left, in the back corner of the main hall, is a guardian. 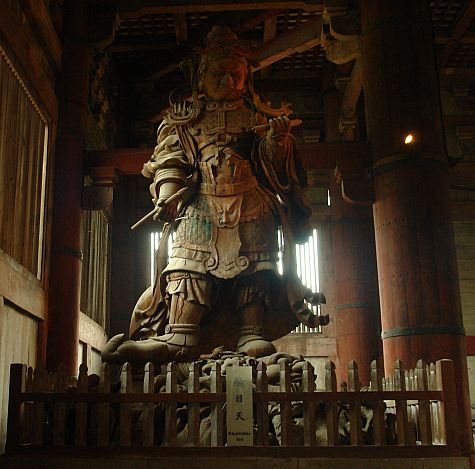 Circling to the other back corner was another guardian. 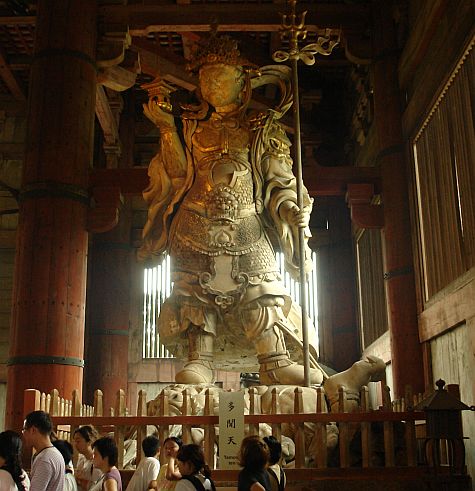 Near the front entry are stalls selling temple souvenirs. One more permanent option is the purchase of roof tiles. 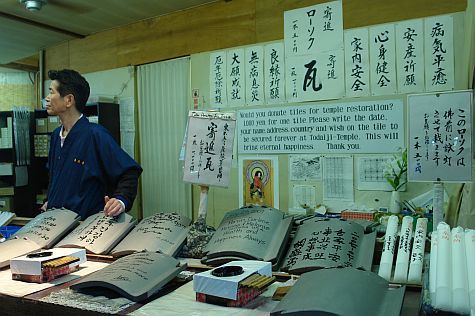 Diana was interested in the wide selection of charms, at a slightly better price than those we had seen in other temples. Most helpful were the labels that translated the specific charms into English: health; health and longevity; life support; fertility; easy birth; luck; protection against evil; cure for disease. 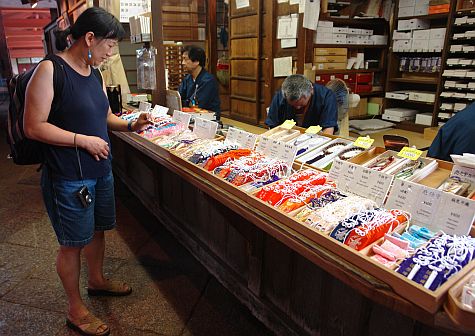 Around the corner, the selection of charms continued: protection against misfortune; giving you a partner in life; good relationships; good academics; passing an examination. 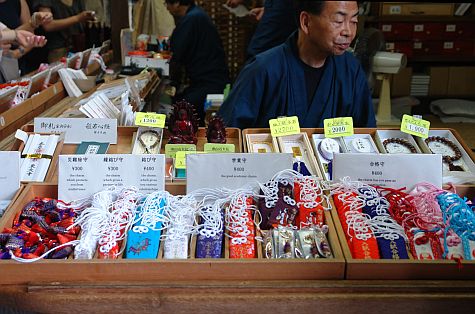 Priests up on the altar are barefoot. The rows of slippers at the foot of the stairs were orderly. 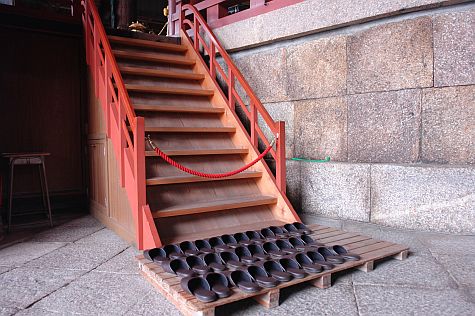 Outside the main hall was also a large pond to the north and east. 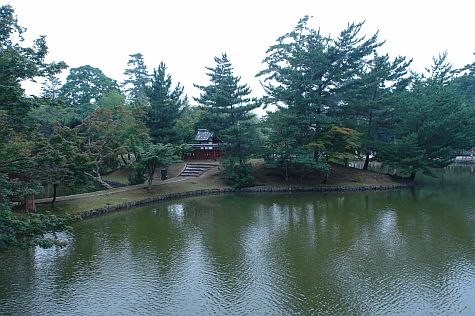 Toda-ji is one of the most popular attractions at Nara, and in Japan. For us, watching the deer was as much of the experience as entering the temple.