I guess that I’ve travelled on airplanes for about 35 years, yet I’ve never been routed through JFK airport in New York. From Toronto, I’ve flown to Laguardia airport and Newark airport many times, but I’ve never had an intercontinental flight that would send me to JFK. This time, the huge price differences in airfares to Finland drove me to take this alternative.

The American Airlines puddle-jumper flight from Toronto to JFK was slightly annoying, because they insisted on my checking my carry-on luggage when I boarded. I chose that luggage specifically because it’s well under-sized for carry-on! Strangely enough, the Toronto to JFK flight took off late and then flew only 1 hour, while it usually takes 1:20 for a flight to Laguardia.

My first impression of JFK airport was that it was new and modern. The American Airlines flight landed at Terminal 9, and at the very end of the pier. 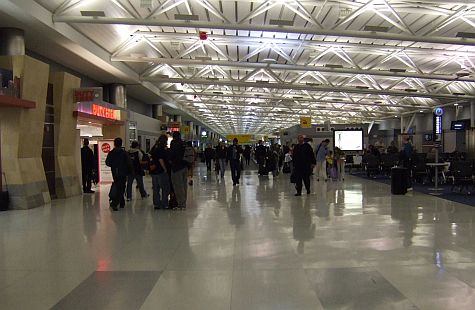 Following the signs led to a long escalator ride down, and then an underpass, to an long elevator ride up. 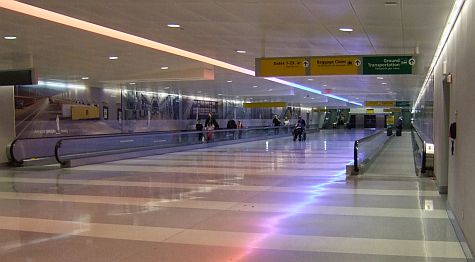 At top of the elevator, I passed the security gates where passengers check in to Terminal 9 flights. This was getting to be a very long walk. 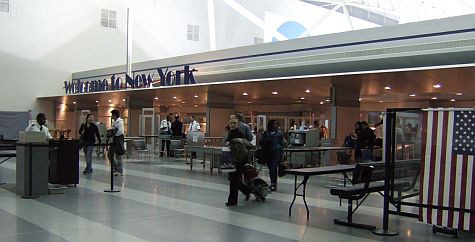 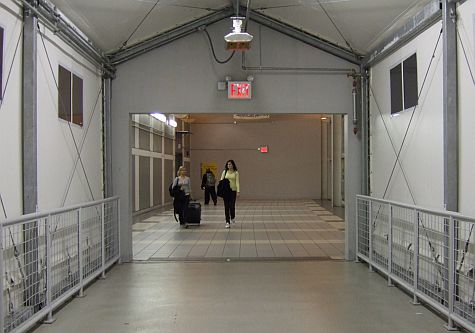 After going through some narrow corridors, the Finnair gates looked ominous. I arrived just in time for the 45-minute cutoff. 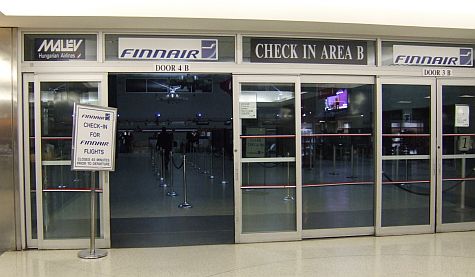 Since I was changing terminals, it meant security and x-rays again. I then finally found myself in a very dark and warm gate area. Finnair could use some brightening up! 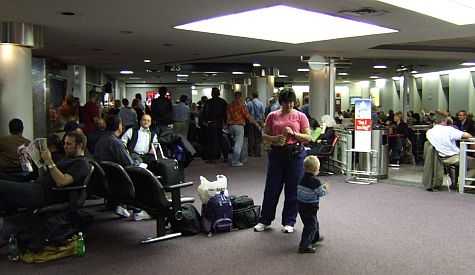 Marianne had scheduled the same flight, which would make the pickup in Finland somewhat simpler. She was passing her time on needlepoint, having arrived at the terminal in light traffic (with a courtesy upgrade to the American Airlines lounge serving free drinks!) 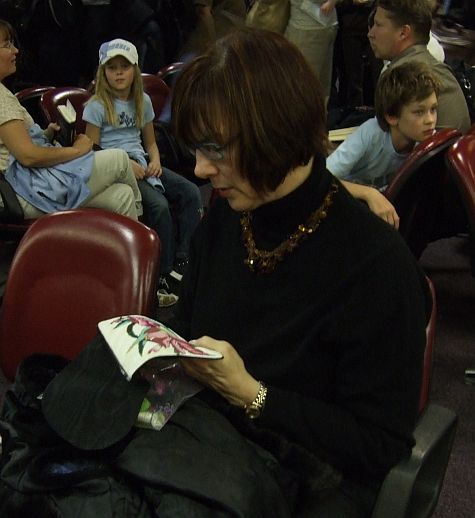 It strikes me that JFK airport must have been designed in the days before airports had shuttle trains running between terminals. I know why passengers complain about changing terminals at Heathrow, and I now know why there are so many complaints about JFK. Although JFK Terminals 8 and 9 are right next to each other, there’s probably at least a 2-mile walk between the two! I’m glad that airport designers have figured out better ways to design passenger transfers, but I guess that that doesn’t help older terminals.

2007/01/20 addendum: On the return flight through JFK, I had a 75-minute connection. After leaving the plane, I had to wait in a long line for immigration with a few hundred people. Then, I had to claim my luggage (which was 15 minutes to come down) so that I could recheck it for Canada. I ran through Terminal 8, retracing the path from the outbound. When I reached Terminal 9, I starting hearing the final calls for flight to Toronto, but still had to go down the escalators, across the underpass, and up the escalators.

I ran the rest of the way to the end of the long pier at Terminal 9, and arrived 2 minutes before the flight was to leave. The check-in clerks said that I was too late. They rebooked me on the next morning’s American Airlines flight, because the 5:15 p.m. is the last one to Toronto. I then walked all the way back to the Finnair counter in Terminal 8, where I caught the check-in clerks leaving for the day. A few minutes later, a kind Finnair representative generously gave me a vouchers for a hotel and meals. (My luggage would stay locked up in transit overnight). He said that American Express Travel shouldn’t have booked such a tight connection, and that a 2-hour transfer is the minimum for JFK airport.

I’ll do my best to avoid JFK airport from now on. I didn’t really need to spend another night in a hotel, and I think that the extra stress prolonged my jet lag from this trip. Changing planes in the United States, having to claim and recheck baggage, is just a bad idea.