In honour of Jane Jacobs, Toronto was one of the cities offering a weekend of “free, community-based series of urban walking tours, led by volunteer guides”. Of the 68 tours available in Toronto, I chose the Jane’s Walk on “Creating an Urban Estuary at the Mouth of the Don” led by Ken Greenberg. It was an easy bike ride to the starting point, the Keating Channel Pub in the Port Lands. 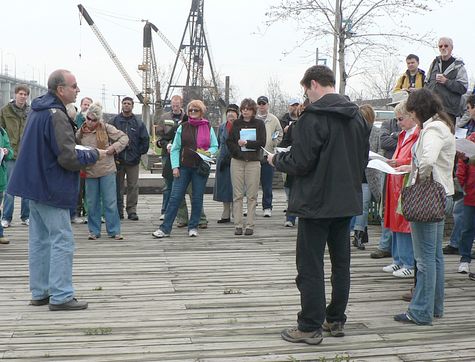 Ken Greenberg had described the walk as follows:

Major world cities such as Toronto are in transition, needing to re-integrate strategically important post-industrial landscapes while reframing their interactions with the natural environment. Through a major initiative of WATERFRONToronto the long neglected area where the Don River enters Toronto Harbour is being transformed into a naturalized river mouth in a generous park setting as the centerpiece of vibrant new mixed-use riverfront and lakefront neighborhood that unifies the goals of ecological restoration and urban regeneration. A team led by Michael Van Valkenburgh Associates of which I am part was selected through an international competition to guide this effort. The tour will explore the past, present and future of this remarkable site.

Looking northwest from the pub, downstream on the Keating Channel, the Cherry Street bridge south of Lakeshore Boulevard East is in the foreground, and downtown Toronto is beyond. 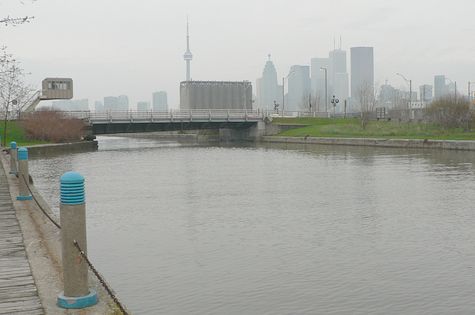 Looking east, upstream on the Keating Channel, the elevated Gardiner Expressway turns north to enter the Don Valley Parkway. The Don River would naturally have gone south through the area now the Port Lands, but was redirected at the beginning of the 20th century to flush sewage more rapidly into the harbour as an alternative to the natural path through the marsh. Greenberg foreshadowed the announcement by Mayor David Miller that the elevated roadway would be brought down to grade, and routed further north so that promenades can be constructed along both the north and south banks. 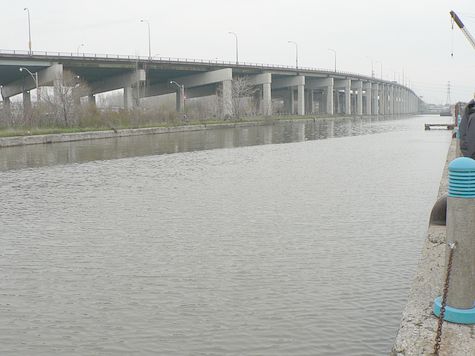 From the pub, we walked east on Villiers Street, parallel to the Keating Channel. As we approached Don Roadway, I looked back west. The railway tracks reflect a history of industry, but we don’t live in the iron age any more. The Port Lands implementation plan by WATERFRONToronto will put housing and light rail transit in this area for thousands of people. 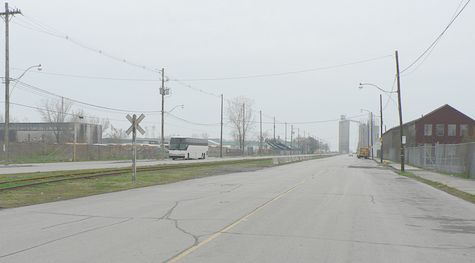 Looking north, the eastbound and westbound elevated roads of the Gardiner Expressway will eventually be demolished, and the northbound ramp will be brought down to grade. The area covered by grass acts as a natural flood plain, should a torrential rainfall into the Don River cause the Keating Channel to overflow. 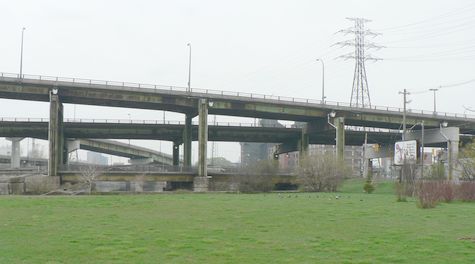 On Villiers Road just east of Don Roadway is the new Filmport complex. As construction continues to fill in the area over the next ten years, Toronto will not only have one of the world’s largest studio campuses, it will also include North America’s largest soundstage. 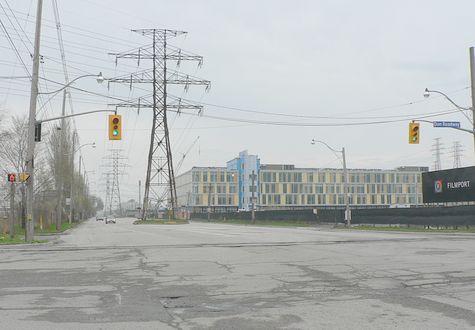 The tour took us south on Don Roadway, and then turned west on Commissioner’s Road. There are some businesses, such as this foundry, that city planners would like to preserve in the community. In a mixed use neighbourhood, it’s important to have both housing for residents, and jobs where they can walk to work. 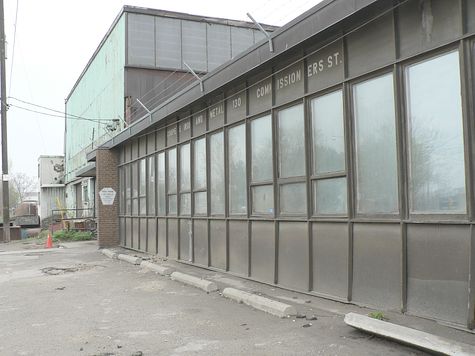 The Dominion Bank opened a branch on Commissioner’s Road in in 1921. It hasn’t been active as a bank for some decades, but perhaps in the redevelopment of the area, it will be a bank again. 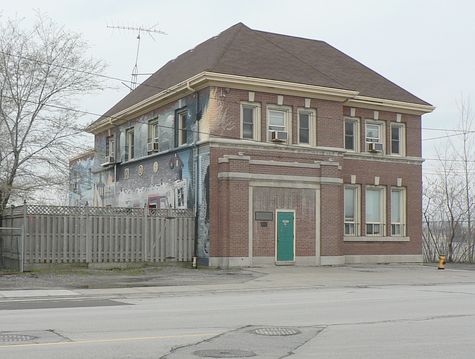 Commissioner’s Street dead ends into Cherry Street. The Cherry Restaurant hasn’t served food in recent years, but has been the site of some film shoots. The Essroc silos store cement from Picton to be distributed around the region. 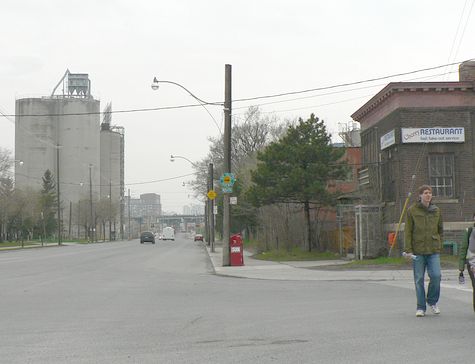 Looking south on Cherry Street, the T&T Supermarket is the largest full service grocery store in downtown Toronto. We crossed over to the west side of the street, and walked south. 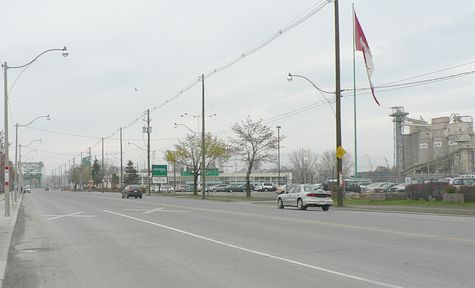 Continuing west, Polson Street leads to Toronto Harbour. Looking north, there’s a large parking lot, and the Keating Channel would be just beyond. 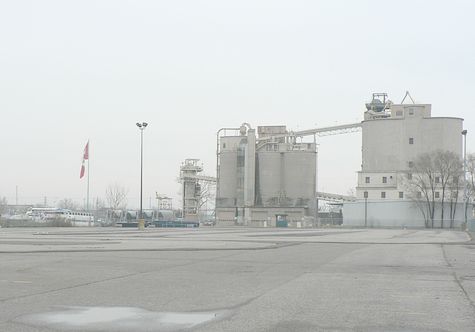 Turning to look south, we see the reason for the parking lot. Polson Pier is large entertainment complex for nightlife and corporate events. 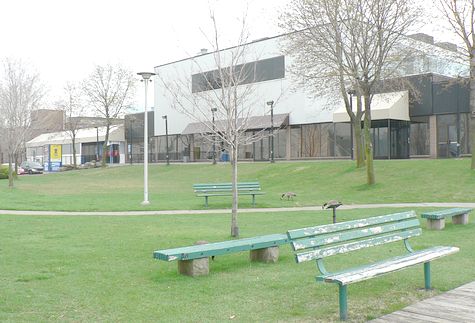 Polson Pier is right up against the water’s edge. The boardwalk is presumably city property, but admission onto the Polson property must be blocked when there’s entertainment playing. 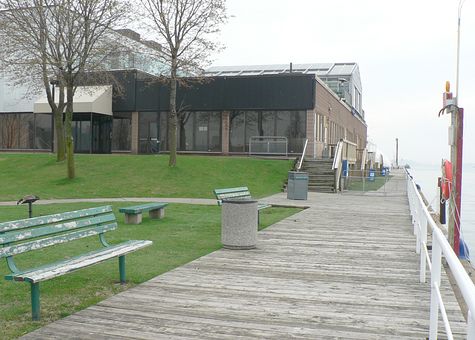 It’s a short distance from Polson Street to the eastern tip of the Toronto Islands. The land was a peninsula until 1858, when a storm separated the tip from mainland, creating a channel. 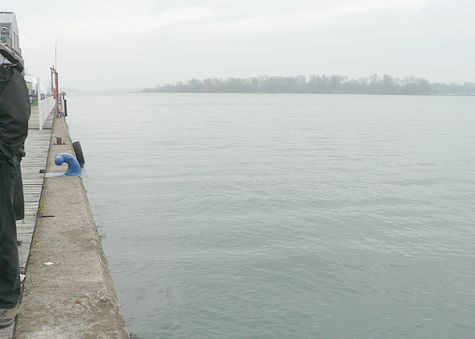 Looking northwest from Polson Street, the West Don Lands are still in an early stage of redevelopment, yet more mature than the Port Lands. 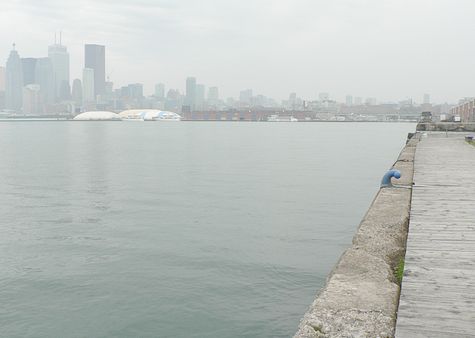 Despite the looming clouds, our walk had been fortunately dry. The start of a light rain made this a natural end for the formal tour. I walked back to the pub and biked home. I wasn’t motivated to join the evening walks in the rain. I probably should have followed through with another walk on the Sunday, but got distracted by other interests.