We planned for Monday morning on the Ginza. We weren’t really looking to buy anything major, but the showrooms are open. We declined to sign up for a test drive on Tokyo streets at the Nissan Gallery. Instead, we were entertained by watching the models recite their lines extolling the virtues of the Nissan Skyline, in Japanese. This vehicle is a luxury touring car not exported to North America. The main showroom only has room for one car, which rises on a pedestal and rotates. The three or four attractive women ensure than visitors aren’t harmed by the circling platform. 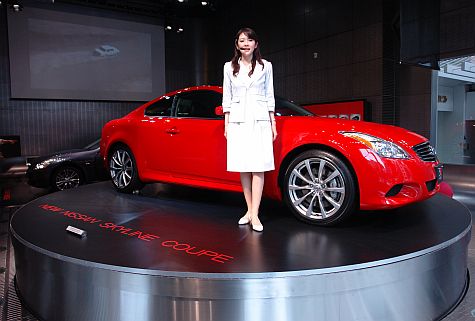 For lunch, we stopped in a ramen house on a side street, Hanatsubaki-dori. This is laid out as an open kitchen, with maybe 8 stools around the counter. We ordered noodles with Chinese-style BBQ pork from an English menu. The ramen house must thrive on serving lunches to local workers. Other customers came in and ordered without a menu. Then a businessman came in the front door to return a bowl on a tray. The decor isn’t the attraction, here. 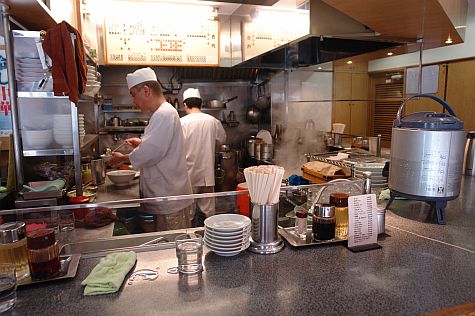 The Sony showroom on the Ginza is famous, so we had it on our itinerary. 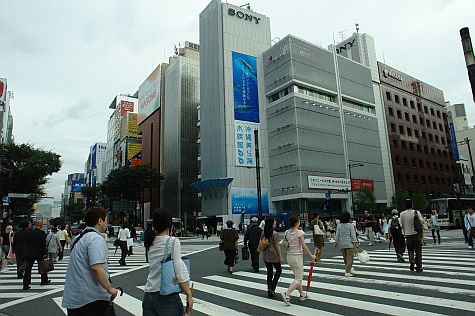 Sony is sponsoring an aquarium. They take digital movies of the swimming fish and show them on big screen televisions as a demonstration of how realistic their images has become. 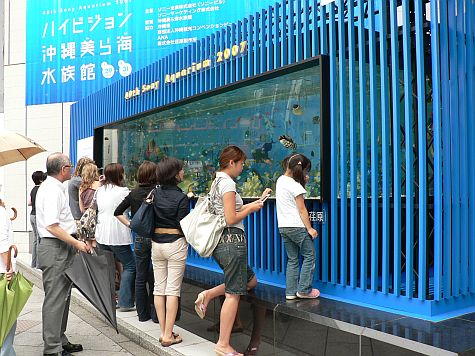 The showroom is actually relatively small, with product categories split over maybe five levels. Here’s the floor with the displays of walkmans and accessories. There isn’t much beyond this wide-angle view. 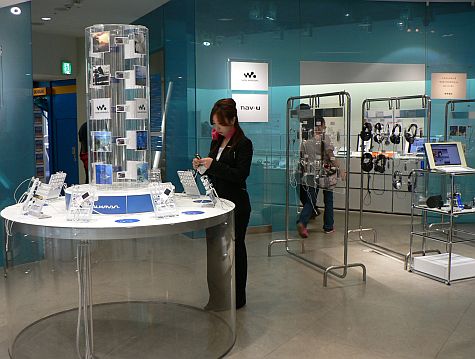 If you’re a tourist and want an international version of a Sony product, some models are available for only a small premium above the model for the Japanese market. 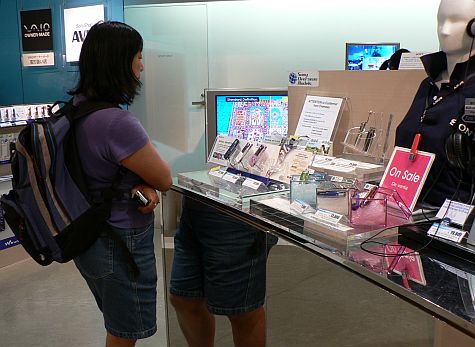 Globalization and the Internet has changed the world of marketing for consumer electronics. I follow these technologies, and didn’t see much that I hadn’t seen through a web browser. Prices seemed slightly higher than at home. The only trend that I picked up is that next year’s earphones will be in a necklace style, so the earplugs don’t fall on the floor when they’re not in your ears.

Outside the Sony Building is another of the intersections where traffic from all directions stop, and pedestrians can cross any direction. 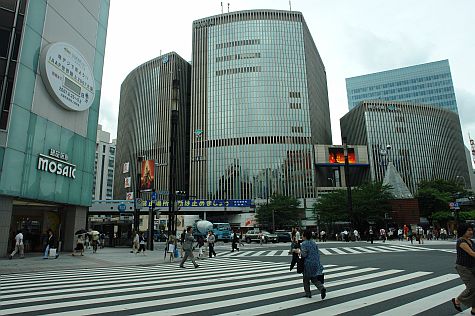 In another map challenge, we walked north and then in circles to find the Muji store. Simply, Muji is the Japanese Ikea. It designs private label lifestyle goods and distributes them in company-owned stores. Diana and I had stopped by the Muji store near Covent Gardens in London, some years ago, but they only stocked small goods, e.g. stationery. Despite the fact that the red roof of the Muji store shows up on Google Maps (albeit Japanese!), we probably spent a half hour trying to locate it. 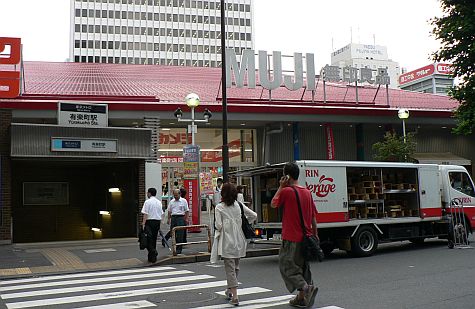 Muji is on the second floor of the building, up a set of escalators. I was thinking about buying some shirts — as an alternative to doing hand laundry! — because the prices were reasonable. Diana didn’t think that the fabrics suited me, so all we bought were some stationery supplies. 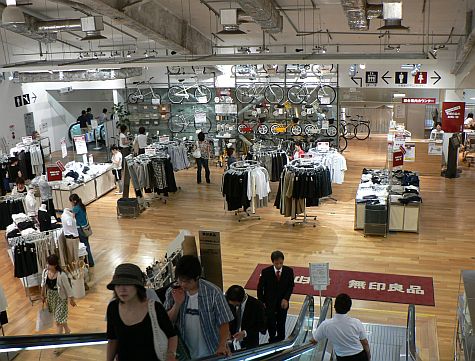 In my web surfing on bicycles, I’ve noted the Muji has its own brand of bicycles. Urban bicycles, folding bicycles, children’s bicycles. They’re not high-performance vehicles, and look to be designed for durability. 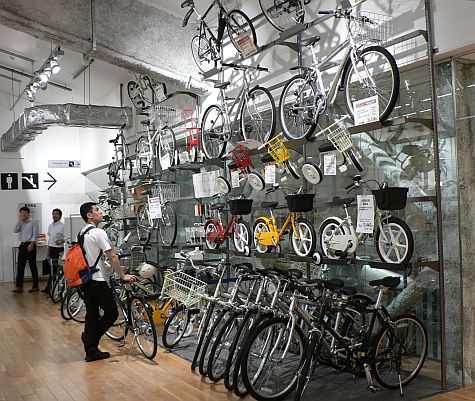 Like Ikea, Muji offers packaged imported foods and some ready-to-eat foods. They don’t have the same cultural accents as the Swedes. 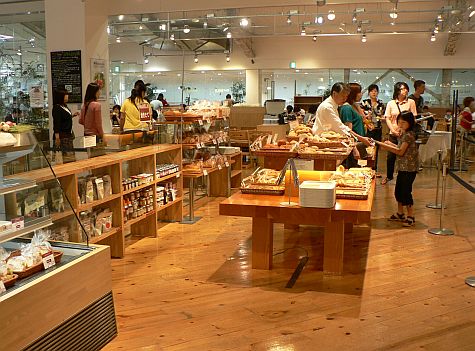 If we were hungry, Meal Muji is a moderately-priced option. Their sandwiches aren’t that distinct, but there’s a large seating area. 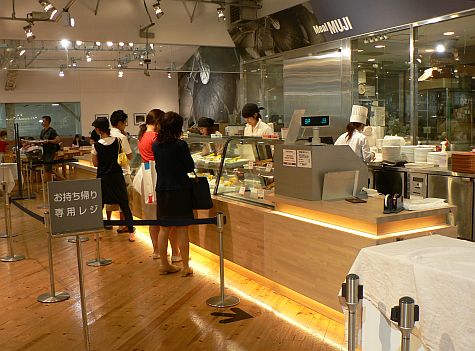 Downstairs, on the first floor, there’s a Bic Camera. This is one of the big electronic chains in Tokyo. The prices for MP3 players may have been slightly cheaper than back home, but not enough to make a long-distance warranty worthwhile. 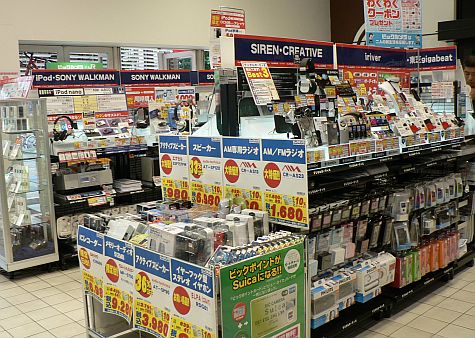 If you find yourself in Tokyo looking for Muji, it’s at the Yurakucho subway station, just west of the rail bridge. I had a detailed map book of Tokyo, but next time, I’ll look for a folding map. This map book had gaps between the most popular districts. 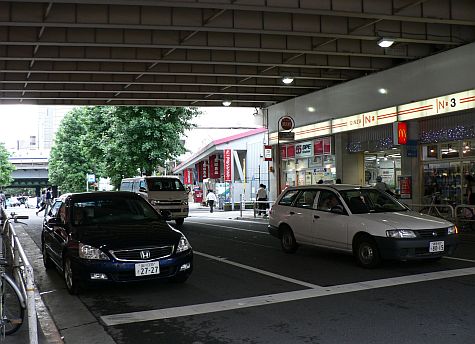 The area north of the Ginza isn’t really a tourist area. It’s commercial, so it has stores that office workers would patronize. We didn’t succumb to eating burgers while in Japan, but were amused at the variety of choices available at a Wendy’s. 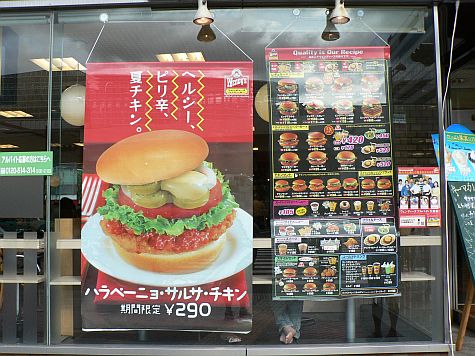 When I’m not in a hurry, I like the challenge of finding places in cities that don’t have grid layouts. There’s always unexpected sights around the corner. I don’t know why I would have more trouble with Japanese maps that anywhere else, but this proved to be the case on more than one instance on this trip.