I’ve been reporting on my investigation of the Blogspot feed problems as not with RSS Bandit, but with the Blogspot author using Microsoft Word and then copying-and-pasting the text, introducing Microsoft tags into the entry, as described by Feedburner support.

I’ve been having a constructive dialogue with Mike Hessey, from The Folding Society, that was one of the blogs where I was having a challenge. Within 24 hours (after he had a bike ride with one of the contributing bloggers, who had used Microsoft Word and then copied-pasted), Mike reported that he had (manually) removed the offending tags.

My RSS Bandit screen now looks something like this. 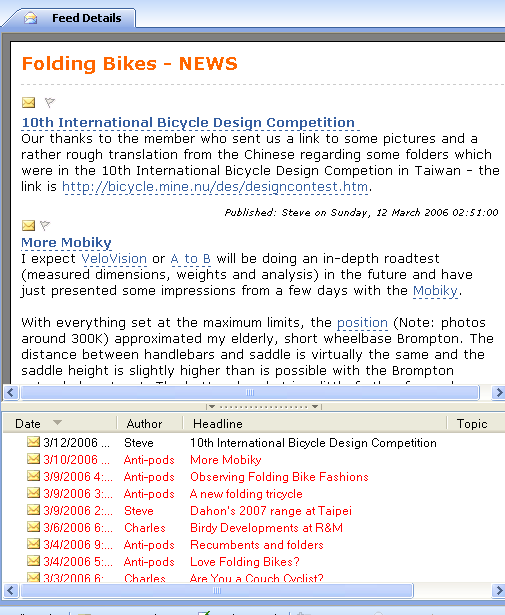 I’m somewhat surprised that I had to do so much digging to resolve this issue, but I guess that (a) the majority of web users are not yet into RSS and readers, and (b) the number that do have problems just give up and don’t spend time doing problem determination.

Now, it’s supposed to be 16 degrees in Toronto this afternoon. I really should go out and get on one of my folding bicycles, myself!