An exhausting week for me, as I went bicoastal. Strangely enough, it’s cheaper to fly Los Angeles to Newark plus New York Laguardia to Toronto, than to fly Toronto to Los Angeles. I wouldn’t recommend it as a regular activity, though.

I was scheduled for the SSME Summit at IBM Palisades, and missed the first evening. Minna and Taina had flown in from Finland, and had visited at NJIT for a few days. During the meeting, I saw Ian online, and sent an impromptu message to see if he was available for lunch. 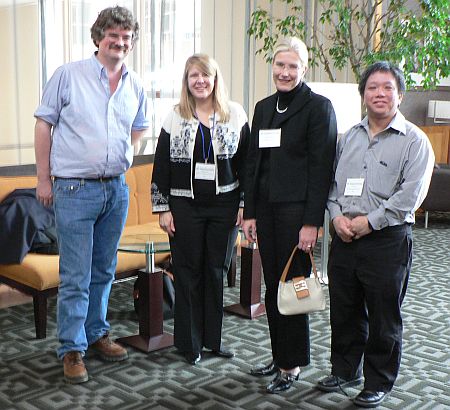 This was a reunion, of sorts, because Ian and Minna used to come over to Palisades with DLH for our “salon” discussions, where we were learning from each other on a wide variety of research subjects.
It was a bit strange to be back at Palisades, because this was almost exactly five years since I had really spent any time there. I was teaching a class when the planes hit the World Trade Center on 9/11 in 2001, and then attendance for corporate training fell off a cliff.

A lot of the waiters and waitresses in the dining room still remember me, though. For the better part of three years, I must have been there almost every other week.