In my travels, I’m usually happy to just get around the city that I’m visiting. There’s usually plenty to do around most urban areas — museums, markets, hangouts — and I get to know the local streets (on my folding bicycle) or local transportation. On my trip to Finland last November, I was feeling pretty burned out — even missing the outbound flight — and the dreary weather encouraged me to stay in the hotel and just work. (This was just before I figured out that I was having problems with my vision and would need a cataract surgery, so the whole situation may have foreshadowed that I was turning agoraphobic).

Usually, on one of the weekend days of my visits, Karlos and I usually take some time off, visiting Kiasma, or just having lunch and walking around the city — but we set a bad pattern on the last trip. In November,Â he first begged off going out because he was trying to meet a deadline in editing a book, and I then later begged off a dinner because I had to prepare for a lecture. Toward the end ofÂ that visit, we did get to meet for a nice dinner, but winter was setting in pretty early for other activities. I think that this trip is my eighth visit to Finland since 2003, but unusual in a strong probability for sunny weather and long days with light. I had suggested to Karlos that we might take the drive to Porvoo if the weather stood up.

We were lucky, and the weather was great. Porvoo is an easy drive — a little over an hour — east from Helsinki, or potentially a slow ship voyage along the coast in the summer. Porvoo was settled at the end of the 13th century — it has a history of being granted town status by the King of Sweden in 1346. (As historical context, Finland became a Grand Duchy of Russia in 1809, got its own parliament in 1906, and finally declared independence in 1917. It’s a relatively young country!) We started our walk at Porvoo Cathedral, which has had its current form since the end of the 15th century. 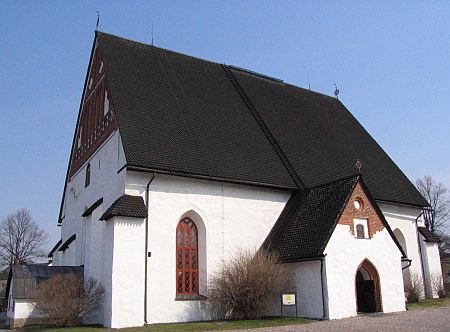 Karlos and I wandered down towards the old town centre, which has largely evolved to support the tourist trade with “antique” shops. The town seemed pretty quiet, as it’s early in the season for visitors. As we tried to find our way down to the riverside to see the shore houses — painted in red ochre to honour King Gustav III’s arrival from Sweden in the 18th century — we poked around some “antique” sheds. The inventory proved to more “used” than antique — but Karlos discovered a wooden stepladder in good condition that he says will fit well in his home. 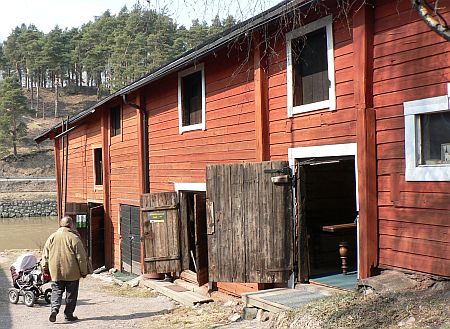 We went into Restaurant Timbaali — an 18th-century house modernized as a series of dining rooms. The restaurant was otherwise unoccupied — it did seem early for the tourist season! — but was set with nice tablecloths, so Karlos and I decided to try lunch there. IÂ chose fish dishes, and Karlos enjoyed the special appetizers — escargot with blue cheese sauce. (I’ve since discovered that snail farming seems to be a Porvoo speciality). After lunch, we walked west to the river, and then south into the new town. By mid-afternoon, the open air market was closing, so we walked northwest up to the Taidehalli (Art Hall), in a building original constructed as a Swedish elementary school in 1909. The paintings, done by a local artist weren’t to our tastes, so it took us less than 5 minutes to cover the three or four rooms. Karlos and I decided to just wander around the back lanes of Old Porvoo, looking at the houses. 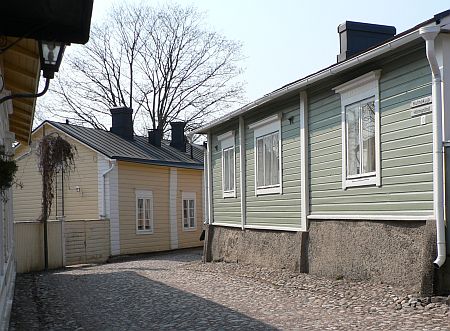 I’m really curious why the houses in Porvoo (and elsewhere in old Finland, and even Estonia) are painted these shades of yellow and green. It chould just be aesthetic, but maybe it’s also driven by the local choices for materials.

In all, it was a relaxing day in Porvoo. Karlos will be making at least one return visit again soon … with his van, to pick up his ladder!

(You may find more images of Porvoo on my home server, if it’s up!)