It’s less than a 90-minute drive from Saint John to Fredericton, so we had a mid-morning run on Highway 7 through scenic New Brunswick.  Fredericton is much smaller than Saint John, but has the feature that it’s the capital of New Brunswick. 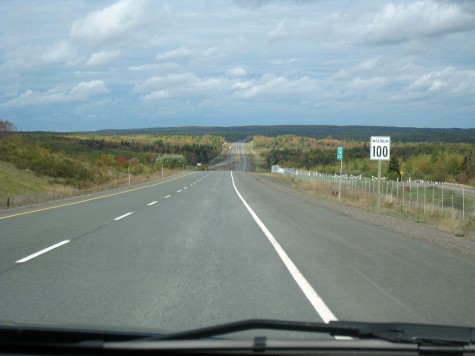 We again arrived with enough time for lunch and some sightseeing.  By the Saint John River, there’s a park with the Lighthouse Adventure Centre. 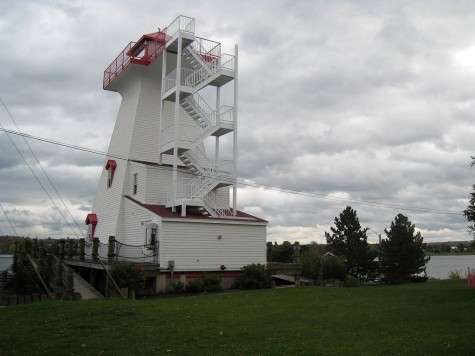 We walked around the front side, to see that the lighthouse was completely closed.  On a cool fall weekday, there wouldn’t be too much demand for ice cream on the ground floor. 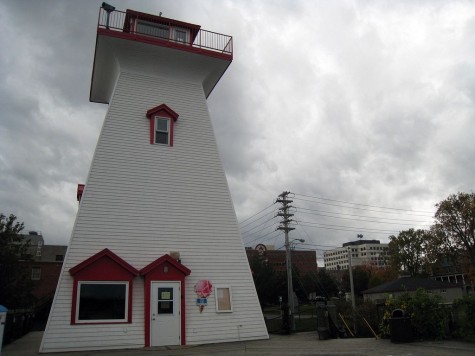 Looking down, we saw the south section of the Riverfront Trail beside the shore.  The Saint John River curves, with a flow to southeast at this point. 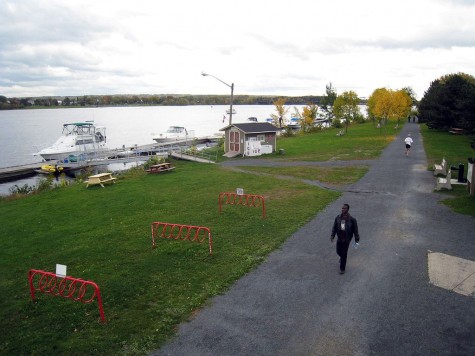 The Riverfront Trail continues to the north, where we could see the Westmorland Street Bridge leading to Nashwaaksis, a neighbourhood now amalgamated with Fredericton. 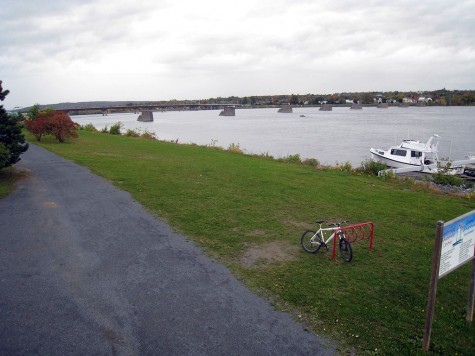 As we walked back from the shore on Regent Street, the York-Sunbury Museum was right across the street, at the southeast end of Officer’s Square. 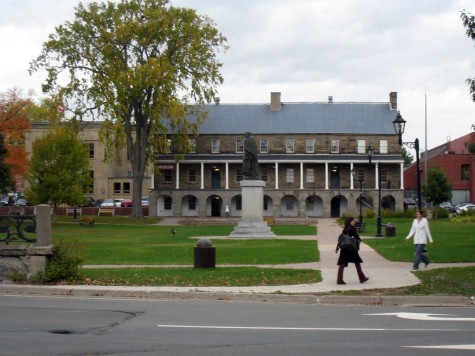 We turned onto Queen Street.  Checking our watches, we still had time before our meeting, so we decided to find out what the museum is about.  It’s run by the York-Sunbury Historical Society, reflecting not only those two counties, but also the general history of New Brunswick. 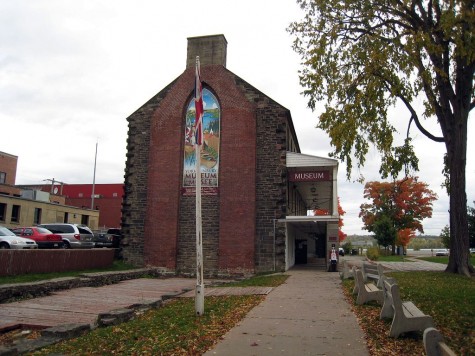 The museum houses the controversial Coleman Frog.  It was either overfed and preserved after death, or a hoax perpetrated on the community. 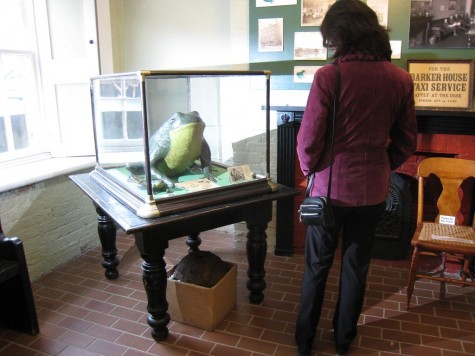 One room of the museum featured typical farm tools from bygone days. 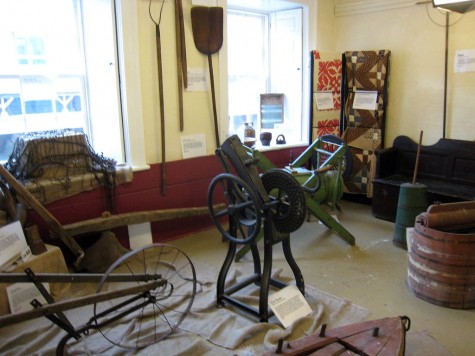 Other displays that I found interesting included the 1940s war brides from Europe (e.g. bringing Italians into Canada), and the Acadians, with French settlements in the area before 1700.

After the short visit to the museum, we walked westward on Queen Street.  Across the street, the buildings are more modern. 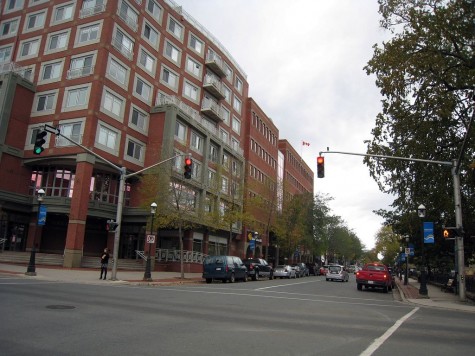 Further along, the historic Garrison district has been converted into craft shops and restaurants. 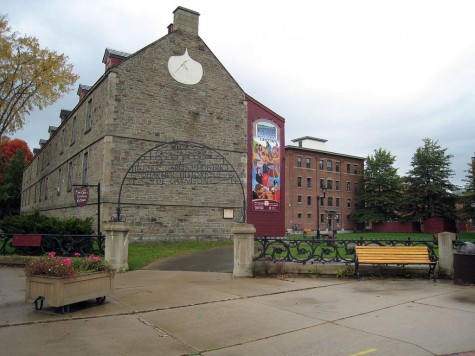 There’s a Visitor Information Centre in City Hall, where we found some local maps. 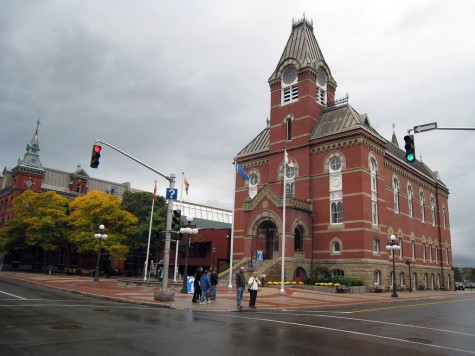 The fountain in front of City Hall has traditional touches. 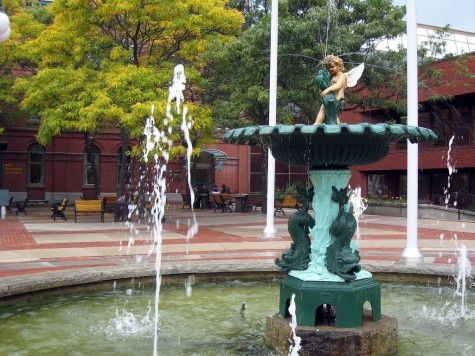 For lunch, we looked over on Regent Street, up from the lighthouse. 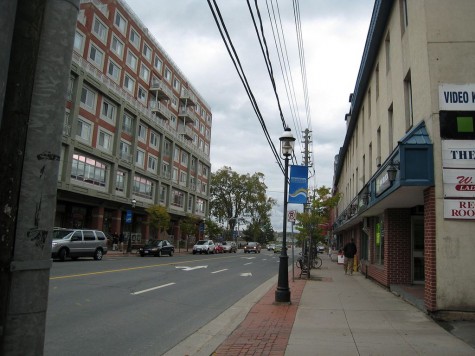 The reviews on The Blue Door Restaurant suggested a good option for lunch. 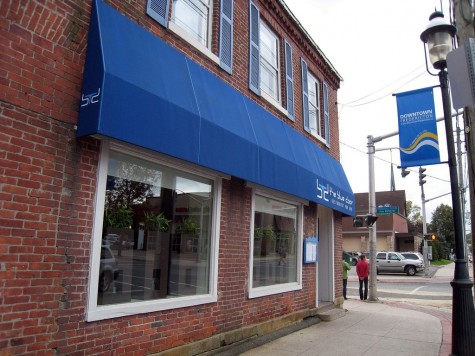 The menu had an interesting choice of fusion cuisine.  The most remarked item was Yesterday’s Soup; because soup always tastes better on the next day.  Stephen asked if he could have today”s soup, but was told to “come back tomorrow” 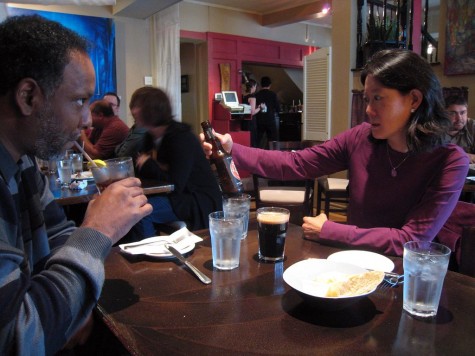 After our meeting in Fredericton, we made a direct drive to the Saint John airport, which isn’t near the city centre, but beyond it on the east side.  It’s the most modest airport that I’ve been to, in some time. 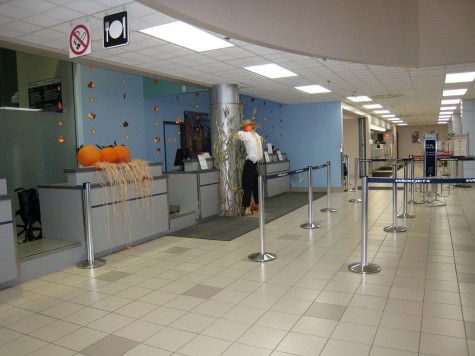 We had expected a full-service restaurant at the airport, and were surprised to find only a small snack bar.  To their credit, when you request a chicken sandwich, it’s made to order … from whole pieces of chicken.  Stephen somehow lost his boarding pass, and when he went to the check-in counter to ask for another, the clerk didn’t even ask for his name.

On the flight, we were all tired after visiting three cities in two provinces in three days.  I’ve now had a taste of the Atlantic provinces of Canada, and appreciate the slower pace and sense of tradition in these original pre-Confederation settlements.